During a study with captive vampire bats at the Smithsonian Tropical Research Institute (STRI) in Panama, a young vampire bat pup was adopted by an unrelated female after its mother died. Although this observation was not the first report of adoption in vampire bats, it is uniquely contextualized by more than 100 days of surveillance-camera footage. This footage captured by STRI research associate Gerry Carter's lab at Ohio State University reveals intimate details about the changing social relationships between the mother, the pup and the adoptive mother throughout their time in captivity.

"The adoption took place after a very sad but ultimately serendipitous occurrence," said Imran Razik, then short-term fellow at STRI and doctoral student at the Ohio State University. "We realized after the mother died and the other female stepped in to adopt the baby, that we had recorded the entire social history of these two adult female bats who met for the first time in captivity. The strong relationship they formed based on grooming and sharing food with each other may have motivated this adoption."

To learn more about how vampire bats form social bonds, researchers in Carter's lab captured vampire bats from three sites across Panama. These sites were all very distant from one another, such that bats from different sites were unrelated and had never met before. Their new home, a cage shrouded in black mesh fabric, was fitted with three infrared surveillance cameras that each recorded about six hours of footage every day for four months.

Based on the footage, bats that were initially strangers began to form new social bonds, which are best defined by grooming and food-sharing interactions. Grooming other individuals is somewhat common, whereas food sharing is less common, especially among strangers.

Vampire bats must eat often to survive--typically every night. If a bat is unable to find a blood meal, it may receive regurgitated blood from a close social partner.

When the mother bat, Lilith, unexpectedly died and her 19-day-old pup was adopted by another female, BD, the research team continued their observations.

"Shortly before Lilith died, I noticed that the pup would occasionally climb onto BD, and I suppose this may have initiated a cascade of neuroendocrine mechanisms that caused BD to start lactating," Razik said. BD was not pregnant and did not have a pup of her own, but Razik found that she was lactating on the day Lilith died. After Lilith's death, in addition to nursing, BD appeared to groom and share food with the pup more than any other female in the colony.

A German researcher in the 1970s observed vampire bat adoptions several times in his captive colony, so this finding was not new. However, before leaving Panama, Razik gave a tour of the vampire bat project to one of STRI's emerita senior scientists, Mary Jane West-Eberhard, and she mentioned that it would be interesting to follow up on the relationships between the mother, the pup and the adopter. Carter and Rachel Page, STRI staff scientist and head of the Batlab in Gamboa, Panama, agreed that it was worth taking a closer look at the relationships between these bats.

When Razik reviewed the videos after the experiment was finished, not only did it turn out that BD and Lilith had been primary grooming partners, but BD was also Lilith's top food donor. However, Lilith did not appear to share food with BD. Moreover, the data confirmed Razik's initial impression--BD helped the pup at rates much higher than any other female.

"Another intriguing discovery was that BD and another bat, called BSCS, both of which had been in captivity before, were the two bats who groomed the pup the most," Razik said. "Now we're wondering if somehow the experience of being in captivity motivates individuals to invest in other bats at higher rates or adopt orphaned pups in critical need."

"Compared to other bats, vampires make extraordinary investments in their offspring," Page said. "And we still don't know if, or how often, adoption may happen in the wild. But this was an amazing chance to better understand what kind of relationships might result in an adoption."

"Studying adoption might give us insight into what immediate factors in the brain or environment affect parental-care decisions," Carter said. "As a new parent myself, I have come to realize the utter power of baby cuteness! I feel that my brain has been completely rewired. Most of us can understand the strong desire to adopt and care for a cute puppy or kitten, or to take on the ultimate responsibility of adopting a child. Regardless of why these traits exist, it is inherently fascinating to consider the neuroendocrine mechanisms that underlie them, the stimuli that trigger them, how they differ across species or individuals and how these traits might even be pre-adaptations for other forms of cooperation."

This work was published in Royal Society Open Science. 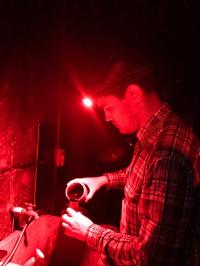 The pup begs for or receives regurgitated food from BD