The high sea ice production of Antarctic coastal polynyas is attributable to the formation of Antarctic Bottom Water (AABW), which is a driving force for global ocean circulation. Sea ice production varies year to year as well as seasonally; however, there are various explanations for the factors that increase or decrease this production, such as wind, temperature, and surrounding ice conditions, which have not been understood till date.

Furthermore, he comments that, "Antarctic coastal polynyas -- in which there is large annual variability in sea ice production -- are areas of the sea in which ice shelf fusion has accelerated in recent years. There is a possibility that these will have a large impact on changes to Antarctic Bottom Water (AABW) in the future, and therefore monitoring is essential." 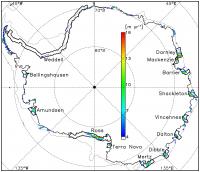