An international group of researchers from the University of Leicester (UK), and the Geological Institute, Beijing (China) have identified a new type of flying reptile – providing the first clear evidence of an unusual and controversial type of evolution.

Pterosaurs, flying reptiles, also known as pterodactyls, dominated the skies in the Mesozoic Era, the age of dinosaurs, 220-65 million years ago. Scientists have long recognized two different groups of pterosaurs: primitive long-tailed forms and their descendants, advanced short-tailed pterosaurs some of which reached gigantic size. These groups are separated by a large evolutionary gap, identified in Darwin's time, that looked as if it would never be filled – until now.

Details of a new pterosaur, published today in the Proceedings of the Royal Society B: Biological Sciences fits exactly in the middle of that gap. Christened Darwinopterus, meaning Darwin's wing, the name of the new pterosaur honours the 200th anniversary of Charles Darwin's birth and the 150th anniversary of the publication of On the origin of species.

Gaps in the fossil record are common – only a tiny proportion of all the animals and plants that ever lived were fortunate enough to become fossilised, and only a tiny proportion of these have been collected so far. Consequently, our understanding, both of the history of particular groups such as pterosaurs, and of the evolutionary processes that generated those histories, is still patchy and often controversial.

More than 20 fossil skeletons of Darwinopterus, some of them complete, were found earlier this year in north-east China in rocks dated at around 160 million years old. This is close to the boundary between the Middle and Late Jurassic and at least 10 million years older than the first bird, Archaeopteryx. The long jaws, rows of sharp-pointed teeth and rather flexible neck of this crow-sized pterosaur suggest that it might have been hawk-like, catching and killing other contemporary flying creatures. These included various pterosaurs, tiny gliding mammals and small, pigeon-sized, meat-eating dinosaurs that, aided by their feathered arms and legs had recently taken to the air, and would later evolve into birds.

"Darwinopterus came as quite a shock to us" explained David Unwin part of the research team and based at the University of Leicester's School of Museum Studies. "We had always expected a gap-filler with typically intermediate features such as a moderately elongate tail – neither long nor short – but the strange thing about Darwinopterus is that it has a head and neck just like that of advanced pterosaurs, while the rest of the skeleton, including a very long tail, is identical to that of primitive forms".

Dr Unwin added: "The geological age of Darwinopterus and bizarre combination of advanced and primitive features reveal a great deal about the evolution of advanced pterosaurs from their primitive ancestors. First, it was quick, with lots of big changes concentrated into a short period of time. Second, whole groups of features (termed modules by the researchers) that form important structures such as the skull, the neck, or the tail, seem to have evolved together. But, as Darwinopterus shows, not all these modules changed at the same time. The head and neck evolved first, followed later by the body, tail, wings and legs. It seems that natural selection was acting on and changing entire modules and not, as would normally be expected, just on single features such as the shape of the snout, or the form of a tooth. This supports the controversial idea of a relatively rapid "modular" form of evolution.

The research team warns that much more work is needed to substantiate this idea of modular evolution but, if it proves to be true, then it might help explain not just how primitive pterosaurs evolved into more advanced forms, but many other cases among animals and plants where we know that rapid large scale evolution must have taken place. The extraordinary evolutionary radiation of mammals following the extinction of dinosaurs is just one of many examples.

Said Dr Unwin: "Frustratingly, these events, which are responsible for much of the variety of life that we see all around us, are only rarely recorded by fossils. Darwin was acutely aware of this, as he noted in the Origin of species, and hoped that one day fossils would help to fill these gaps. Darwinopterus is a small but important step in that direction." 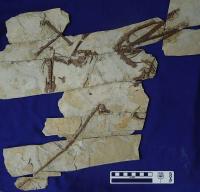 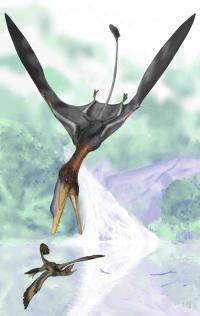