In the scientific paper, "The Impact of a Large-scale Climate Event on Antarctic Ecosystem Processes," published in a special section Thursday in Bioscience, Fountain and his team detail the climate event and summarize the cascading ecological consequences over the last 15 years caused by a single season of intense melting in Antarctica between 2001 and 2002.

"What we saw in the Antarctic summer of 2001 and 2002 could be the Antarctic future in the decades to come," said Fountain, the study's lead author. "What was an otherwise unchanging environment could be on the cusp of very dramatic changes."

The ecosystem still responded to this event after five or more years. Scientists suspect these events will appear more frequently in the future as climate warming affects Antarctica.

The extreme climate shift at Palmer during 2001 and 2002 caused freezing and melting at the edge of the peninsula, resulting in increased algal bloom and Antarctic krill, a devastating decline in the population of Adelie penguins, and an increase in the populations of gentoo and chinstrap penguins.

Oregon's public urban research university, recognized for excellence in sustainability and community engagement, is located in the heart of downtown Portland. PSU's motto is "Let Knowledge Serve the City," and it offers more than 200 degrees with opportunities to work with businesses, schools and organizations on real-world projects. (http://www.pdx.edu) 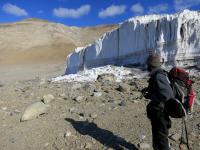 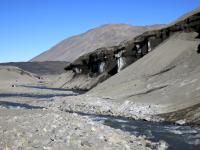