The Neolithic revolution, and the corresponding transition to agricultural and pastoralist lifestyles, represents one of the greatest cultural shifts in human history, and it has long been hypothesized that this might have also provided the opportunity for the emergence of human-adapted diseases. A new study published in Nature Ecology & Evolution led by Felix M. Key, Alexander Herbig, and Johannes Krause of the Max Planck Institute for the Science of Human History studied human remains excavated across Western Eurasia and reconstructed eight ancient Salmonella enterica genomes - all part of a related group within the much larger diversity of modern S. enterica. These results illuminate what was likely a serious health concern in the past and reveal how this bacterial pathogen evolved over a period of 6,500 years.

Most pathogens do not cause any lasting impact on the skeleton, which can make identifying affected archeological remains difficult for scientists. In order to identify past diseases and reconstruct their histories, researchers have turned to genetic techniques. Using a newly developed bacterial screening pipeline called HOPS, Key and colleagues were able to overcome many of the challenges of finding ancient pathogens in metagenomics data.

"With our newly developed methodologies we were able to screen thousands of archaeological samples for traces of Salmonella DNA," says Herbig. The researchers screened 2,739 ancient human remains in total, eventually reconstructing eight Salmonella genomes up to 6,500 years old - the oldest reconstructed bacterial genomes to date. This highlights an inherent difficulty in the field of ancient pathogen research, as hundreds of human samples are often required to recover just a single microbial genome. The genomes in the current study were recovered by taking samples from the teeth of the deceased. The presence of S. enterica in the teeth of these ancient individuals suggests they were suffering from systemic disease at their time of death.

The individuals whose remains were studied came from sites located from Russia to Switzerland, representing different cultural groups, from late hunter-gatherers to nomadic herders to early farmers. "This broad spectrum in time, geography and culture allowed us, for the first time, to apply molecular genetics to link the evolution of a pathogen to the development of a new human lifestyle," explained Herbig.

With the introduction of domesticated animals, increased contact with both human and animal excrement, and a dramatic change in mobility, it has long been hypothesized that "Neolithization" - the transition to a sedentary, agricultural lifestyle - enabled more constant and recurrent exposure to pathogens and thus the emergence of new diseases. However, prior to the current study, there was no direct molecular evidence.

"Ancient metagenomics provides an unprecedented window into the past of human diseases," says lead author Felix M. Key, formerly of the Max Planck Institute for the Science of Human History and now at the Massachusetts Institute of Technology. "We now have molecular data to understand the emergence and spread of pathogens thousands of years ago, and it is exciting how we can utilize high-throughput technology to address long standing questions about microbial evolution."

Humans, Pigs, and the Origin of Paratyphi C

The researchers were able to determine that all six Salmonella genomes recovered from herders and farmers are progenitors to a strain that specifically infects humans but is rare today, Paratyphi C. Those ancient Salmonella, however, were probably not yet adapted to humans, and instead infected humans and animals alike, which suggests the cultural practices uniquely associated with the Neolithization process facilitated the emergence of those progenitors and subsequently human-specific disease. It was previously suggested that this strain of Salmonella spread from domesticated pigs to humans around 4000 years ago, but the discovery of progenitor strains in humans more than 5000 years ago suggests they might have spread from humans to pigs. However, the authors argue for a more moderate hypothesis, where both human and pig specific Salmonella evolved independently from unspecific progenitors within the permissive environment of close human-animal contact.

"The fascinating possibilities of ancient DNA allow us to examine infectious microbes in the past, which sometimes puts the spotlight on diseases that today most people don't consider to be a major health concern," says Johannes Krause, director at the Max Planck Institute for the Science of Human History.

The current study allows the scientists to gain a perspective on the changes in the disease over time and in different human cultural contexts. "We're beginning to understand the genetics of host adaptation in Salmonella," says Key, "and we can translate that knowledge into mechanistic understanding about the emergence of human and animal adapted diseases."

The scientists hope that the current study will illuminate the possibilities of these methods and that future research will further examine the ways that human cultural evolution has impacted and driven the evolution of human-adapted diseases.

Title: Emergence of human-adapted Salmonella enterica is linked to the Neolithization process 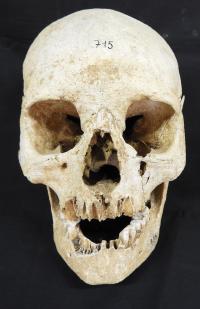