Microbiologists at the University of California, Davis who analyzed swabs taken by astronauts on the International Space Station (ISS) and compared them with samples from homes on earth as well as the Human Microbiome Project found that the microbial community in this unique habitat was very diverse and more closely resembled that of homes than of humans.

This work was part of a nationwide citizen science project called Project MERCCURI. The project is a collaboration between UC Davis and other organizations including Science Cheerleader, a group of current and former professional cheerleaders pursuing careers in science and math.

Previous work from the same Project MERCCURI team sent 48 bacterial samples, collected around the country, to the ISS and described a bacteria that grew better in space than on Earth.

Now the researchers analyzed bacteria found on 15 locations on the ISS and highlighted some of the thousands of species they found there. They then compared their data on the species to published data sets from two other projects: the "Wildlife of Our Homes," study, which evaluated home microbiomes, and surveys of human body sites from the Human Microbiome Project.

"So 'is it gross?' and 'will you see microbes from space?' are probably the two most common questions we get about this work," said author David Coil, a microbiologist at UC Davis. "As to the first, we are completely surrounded by mostly harmless microbes on Earth, and we see a broadly similar microbial community on the ISS. So it is probably no more or less gross than your living room."

Regarding finding microbes from space, "Since the ISS is completely enclosed, the microbes inside the station come from the people on the ISS and the supplies sent to them," he said.

"The microbiome on the surfaces on the ISS looks very much like the surfaces of its inhabitants, which is not surprising, given that they are the primary source," she said. "We were also pleased to see is that the diversity was fairly high, indicating that it did not look like a 'sick' microbial community."

Jonathan Eisen, professor of medical microbiology and immunology and of ecology and evolution at UC Davis and another author on the study, believes Project MERCURRI studies have a lot of value.

"Studying the microbial diversity on the ISS is not only of relevance to space exploration but also serves as an important comparison to buildings on Earth because the ISS has many novel features such as limited influx of microbes," he said.

About: Project MERCCURI was coordinated by Science Cheerleader, SciStarter, and UC Davis, in conjunction with the Argonne National Laboratory. The project was supported by funds provided by Space Florida, NanoRacks, and the Alfred P. Sloan Foundation.

Image 1. International Space Station. This file is in the public domain in the United States because it was solely created by NASA.

PDF of this Press Release: http://static.peerj.com/pressReleases/2017/12/Press-Release-Coil.pdf

Link to the Published Version of the article: https://peerj.com/articles/4029 (quote this link in your story - the link will ONLY work after the embargo lifts)

Background: Modern advances in sequencing technology have enabled the census of microbial members of many natural ecosystems. Recently, attention is increasingly being paid to the microbial residents of human-made, built ecosystems, both private (homes) and public (subways, office buildings, and hospitals). Here, we report results of the characterization of the microbial ecology of a singular built environment, the International Space Station (ISS). This ISS sampling involved the collection and microbial analysis (via 16S rDNA PCR) of 15 surfaces sampled by swabs onboard the ISS. This sampling was a component of Project MERCCURI (Microbial Ecology Research Combining Citizen and University Researchers on ISS). Learning more about the microbial inhabitants of the "buildings" in which we travel through space will take on increasing importance, as plans for human exploration continue, with the possibility of colonization of other planets and moons.

Results: Sterile swabs were used to sample 15 surfaces onboard the ISS. The sites sampled were designed to be analogous to samples collected for 1) the Wildlife of Our Homes project and 2) a study of cell phones and shoes that were concurrently being collected for another component of Project MERCCURI. Sequencing of the 16S rDNA genes amplified from DNA extracted from each swab was used to produce a census of the microbes present on each surface sampled. We compared the microbes found on the ISS swabs to those from both homes on Earth and data from the Human Microbiome Project.

Conclusions: While significantly different from homes on Earth and the Human Microbiome Project samples analyzed here, the microbial community composition on the ISS was more similar to home surfaces than to the human microbiome samples. The ISS surfaces are species-rich with 1036-4294 operational taxonomic units (OTUs per sample). There was no discernible biogeography of microbes on the 15 ISS surfaces, although this may be a reflection of the small sample size we were able to obtain

The bacterial community on the International Space Station resembles homes 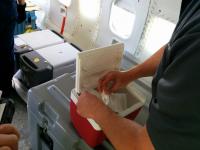 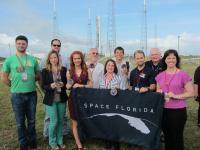