Direct communication between Earth and Mars can be strongly disturbed and even blocked by the Sun for weeks at a time, cutting off any future human mission to the Red Planet. An ESA engineer working with engineers in the UK may have found a solution using a new type of orbit combined with continuous-thrust ion propulsion.

The European researchers studied a possible solution to a crucial problem affecting future human missions to Mars: how to ensure reliable radio communication even when Mars and Earth line up at opposite sides of the Sun, which then blocks any signal between mission controllers on Earth and astronauts on the red surface. The natural alignment, known as a conjunction, happens approximately every 780 days, and would seriously degrade and even block transmission of voice, data and video signals.

The research findings were released this week at the 60th International Astronautical Congress (IAC), the world's biggest space event, being held in Daejeon, South Korea. This new solution is one result of a €100 000 study funded by ESA's General Studies Programme to catalogue non-traditional orbital zones throughout the Solar System that could be exploited thanks to emerging propulsion technologies.

According to the paper, "Non-Keplerian Orbits Using Low Thrust, High ISP Propulsion Systems," an innovative solution to the Mars communication problem may be found by placing a pair of communication relay satellites into a very special type of orbit near Mars: a so-called 'B-orbit' (in contrast to an 'A-orbit', based on natural orbital laws).

However, to counter the effects of gravity and remain in place, they would have to be equipped with cutting-edge electric ion propulsion.

The ion thrusters, powered by solar electricity and using tiny amounts of xenon gas as propellant, would hold the satellites in a B-orbit in full view of both Mars and Earth. The satellites could then relay radio signals throughout the Mars–Earth conjunction season, ensuring that astronauts at Mars were never out of touch with Earth.

François Bosquillon de Frescheville, based at ESA's European Space Operations Centre, Darmstadt, is co-author of the paper together with five engineers at the Universities of Strathclyde and Glasgow, Scotland. He agreed to answer questions on the results being presented by his colleagues at IAC.

Q1. What is special about the orbital positions described in your paper?

Once it is launched, a satellite in unpowered free flight will essentially 'glide' through our Solar System following the troughs and crests of gravitational forces exerted on it by the Sun, the planets and other bodies, much like a surfer glides over wave tops and troughs as she surfs toward a beach. In fact, an unpowered satellite can't do anything but follow these swells of gravitational potential, which constrain its trajectory.

Q2. But if a satellite could generate continuous thrust, it could skip across these gravitational peaks and troughs?

Yes – it could jump, as you say, into another class of orbits - the B-orbits, or non-Keplerian orbits. But you have to provide some on-board means of generating a continuous thrust, pushing in a certain direction against residual gravity. Then, an entirely new set of orbital trajectories become available.

Q3. Why not simply use the thrusters that most satellites already have, like those on Mars Express or Venus Express?

Traditional thrusters use a lot of fuel, so we only fire them for short periods to kick the satellite into a new, free-flight orbit. It is prohibitively expensive in terms of weight to equip a satellite with continuous thrust capability.

But a solar electric propulsion system uses electricity generated from sunlight to emit chemical ions, giving a tiny thrust – about the same force that you feel if you blow on your hand – but over time, it's enough to move almost anything. ESA's SMART-1 got to the Moon in 2004 after 16 months using ion propulsion; its thruster only generated 0.2 millimetres per second per second of acceleration, but that's sufficient!

The trick is to find possible orbital trajectories in our Solar System where such a tiny amount of thrust, applied perpendicular to the direction of the satellite's motion, can usefully keep it in a certain location, supporting scientific observations or communications, for example.

Q4. And that's when you considered the Mars radio communication problem?

Yes. It has been known for some time that, due to the natural orbital motions of the Sun, Earth and Mars, any communication relay satellite that orbits Mars in a traditional, unpowered Keplerian orbit will, at some point, be blocked by the Sun. So it will never enable continuous communications between Mars and Earth for 100% of the time. That's not good for any astronauts on Mars.

You would get, in effect, full-time communications to almost anywhere on the Red Planet's surface. When the Earth–Mars conjunction season is over, the spacecraft could stop thrusting, save fuel and take up regular, unpowered or near-Keplerian orbits until the following conjunction approaches, and then take up their relay positions again for the next conjunction.

We found that a pair of relay satellites would only have to switch on their thrusters for about 90 days out of every 2.13-year period, and this solution would only increase the one-way signal travel time by one minute, so it could be effective.

Q5. Could such a double-spacecraft, 'continuous-thrust' mission be launched today?

Well, most of the technologies are in place or are very close to being ready.

However, our research was only the first step in understanding the complex details of such a mission. A lot more work must be done to understand in detail how the satellites have to apply the thrust - for example, taking into account the natural eccentricity of the Martian orbit. Also, failure scenarios must be studied, to have a back-up plan in case one of the ion thrusters failed. In addition, as part of our research, we catalogued other possible mission profiles.

One example would be to use continuous thrust to create a fixed, virtual 'truss' between two spacecraft perpendicular to their flight direction. It would be like having the two spacecraft connected by fixed bar or rod; this could be useful for certain applications.

Another example would be to hover near one of the Earth-Sun system Lagrange points. NASA studied just such a mission profile, called GeoStorm, back in the 1990s with a view to stationing a satellite closer to the Sun than the L1 Lagrange point so as to provide improved early warning of magnetic storms caused by solar coronal mass ejections. Such a mission would have used a solar wind sail for its thrust, but it could also be done using ion propulsion, which can offer control advantages compared to solar sails; this must be studied further.

There's still lots to be done, but this research will help pave the way for future robotic missions to places we've never been or for a human mission to Mars. 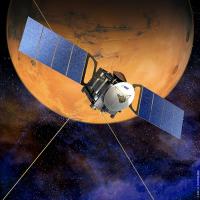 Mars Express: Not Always in Touch