Advances in engineering T cells to treat cancer are paving the way for new immunotherapies targeted at autoimmune diseases, including type 1 diabetes. Now, researchers are also investigating therapies that reprogram T cells to "turn down" an immune response, which may hold promise for curing type 1 diabetes, as well as a number of diseases where overactive T cells attack a person's healthy cells and organs.

"Instead of stimulating the immune system to seek and destroy cancer cells, treating autoimmune conditions will require programming a patient's own T cells to tell rogue immune cells to calm down," said Dr. David Rawlings, director of the Center for Immunity and Immunotherapies at Seattle Children's Research Institute and chief of the Division of Immunology at Seattle Children's Hospital.

Harnessing gene-editing techniques pioneered by Seattle Children's, Rawlings and colleagues have already made headway in equipping T cells with the instructions needed to potentially reverse type 1 diabetes. In a new $2 million research project funded by The Leona M. and Harry B. Helmsley Charitable Trust, researchers will leverage these recent successes using this new form of T-cell immunotherapy into first-in-human clinical trials.

The new research continues the collaboration with Benaroya Research Institute at Virginia Mason, building on significant progress the joint research teams made after receiving a $1 million grant from the Helmsley Charitable Trust in 2016.

In their initial studies, the scientists succeeded in using gene editing to generate human T cells that function as regulatory cells, a type of immune cell that moderates the immune system's response. These engineered regulatory T cells were capable of turning off "dangerous" effector T cells both in the laboratory and in animal studies. In parallel, the researchers were able to isolate T cells that recognized a specific 'antigen' target, and turn these antigen-specific effector cells into regulatory T cells.

Their new studies are designed to single out the dangerous effector T cells that malfunction and attack the pancreas in type 1 diabetes, preventing the production of insulin, and turn them into regulatory T cells.

"These engineered regulatory T cells, when returned to a diabetic's body, would have the potential to stop effector T cells from destroying the insulin-producing cells," said Rawlings. "We believe these cells could be used to treat type 1 diabetes as it begins, possibly leading to a long-term cure."

The next phase of research will continue to draw on the extensive expertise of Dr. Jane Buckner, president of Benaroya Research Institute, and her colleagues to isolate and target the immune cells of the pancreas.

"The benefit of using regulatory T cells for therapy is that the T cells can focus immune suppression to a specific organ without impairing the entire immune system," said Buckner. "For type 1 diabetes, we want to ensure the engineered T cells travel to the pancreas and stop any T-cell attacks in the pancreas, leaving healthy immune cells untouched."

It's Rawlings' and Buckner's hope that this research will lead to new treatments to improve the lives of those battling type 1 diabetes. They believe a clinical trial offering a T-cell immunotherapy product for type 1 diabetes patients is on the horizon.

"The ultimate goal of this research is to bring an engineered regulatory T-cell immunotherapy to patients," said Rawlings.

An immunotherapy delivered through an infusion of engineered regulatory T cells might protect new patients that are developing type 1 diabetes from the life-long requirement for insulin therapy.

Type 1 diabetes patients like 13-year-old Juliana Graceffo must take carefully calculated doses of insulin throughout the day to maintain their ideal blood sugar levels. Giving patients insulin - either through injections or an insulin pump - is currently the only treatment for type 1 diabetes. As patients are often diagnosed with type 1 diabetes in childhood, managing and treating their diabetes becomes a way of life and if control is not maintained, fluctuations in blood sugar lead to chronic damage to organs over time.

"It's hard dealing with type 1 diabetes every day," said Juliana. "A cure would mean that I don't have to think about diabetes all the time, and I can just be normal."

The type 1 diabetes immunotherapy is one of many promising cell and gene therapies in development at Seattle Children's.

In the lab, Rawlings has pioneered a groundbreaking gene editing technique that gives T cells the ability to resist HIV infection and simultaneously kill HIV-infected T cells or B-cell tumors. Most recently, with his colleague Dr. Richard James, they used gene editing to generate B cells that secrete therapeutic proteins.

Gene editing is poised to impact pediatric medicine on many fronts and is now being applied by researchers working to cure cancer, autoimmune diseases and genetic disorders such as severe combined immune deficiency and sickle cell disease. To move this work forward more rapidly, Rawlings' team is also partnering with a gene-editing industry-leader, Casebia Therapeutics, to develop and license new therapies to prevent and treat autoimmune disease using CRISPR/Cas9 gene-edited regulatory T cells.

"Knowledge gained through our work with Casebia is likely to extend to type 1 diabetes, organ transplant, other autoimmune conditions and genetic diseases," said Rawlings. "We're excited to continue to advance this promising research."

Funder
The Leona M. and Harry B. Helmsley Charitable Trust 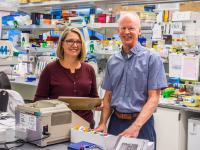