The dry, barren prairie around Alberta's Drumheller area was once a lush and subtropical forest on the shores of a large inland sea, with loads of wetlands inhabited by dinosaurs, turtles, crocodiles and small mammals.

But that changed about 71-million-years ago, according to a new study by researchers Annie Quinney and Darla Zelenitsky in paleontology at the University of Calgary. The researchers' calculations show that drastic climate change occurred during a five-million-year period in Alberta's badlands. At this time, the wetlands dried up and the warm humid climate was interrupted by a sudden cool, drying spell.

The study of ancient climate change is important as it helps researchers understand the impact sudden heating and cooling may have had on plants and animals.

"The big surprise is that some animals, for example turtles, appeared to be more sensitive to habitat disturbances than to climate changes. Therefore, even if climatic conditions are 'ideal,' turtles may disappear or may not recover unless habitats are just right," says Quinney.

Quinney and supervisors Zelenitsky, assistant professor in the Department of Geoscience, and François Therrien of the Royal Tyrrell Museum in Drumheller studied ancient soils preserved in the rocks in the Red Deer River valley near Drumheller that were deposited 72 to 67 million years ago and record information about the past climate and environments.

"By studying the structure and chemistry of ancient soils, we were able to estimate the ancient temperature and rainfall that prevailed when those soils formed millions of years ago," says Quinney, who is now completing a PhD at Monash University in Australia on a full scholarship.

The study is published in Palaeogeography, Palaeoclimatology, Palaeoecology http://www.sciencedirect.com/science/article/pii/S0031018212006785 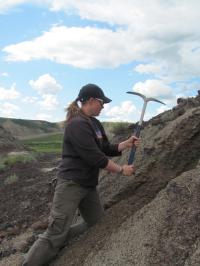