The surface of immune system cells is home to a number of receptors which are able to detect pathogens. As soon as these receptors are activated, inflammation occurs and the body's defense mechanisms kick in. Immune cells also have receptors that regulate or even suppress immunological responses to prevent damage to individual cells.

There are other immune receptors that recognize endogenous substances that are released when tissue damage or cell death occurs. As such, the organism can defend itself even in cases where the damage caused by the pathogen, but not the pathogen itself, is detected.

With the discovery of the surface molecule Clec12a from the family of C-type lectin receptors, the team led by Prof. Jürgen Ruland of Klinikum rechts der Isar have found the first known immune receptor for uric acid crystals. Uric acid is a break-down product of nucleic acids like DNA in response to cell damage. Whenever a large number of cells die, for example when a tumor is being medically treated or during an infection, the uric acid becomes more concentrated and the molecules crystallize.

Immune responses have to be regulated

Immune cells are capable of producing highly toxic substances which can damage healthy tissue as well as pathogens. "Uric acid crystals and other substances originating from damaged cells signal a potential danger to the immune system," says Dr. Konstantin Neumann, lead author of the study. "As long as no further indications of a genuine infection are found, Clec12a's role is to protect the organism from damage triggered by the immune system."

By discovering the immune receptor for uric acid crystals, the researchers have gained an understanding of the fundamental mechanism by which the immune system recognizes crystals. They intend to find out whether there are other receptors like Clec12a that are also capable of sensing crystalline structures. "In the future, we might discover better ways to regulate inflammation with crystal formation, or even use these mechanisms to manipulate the immune system in a targeted way to treat tumors or infectious diseases," concludes Ruland.

A braking system for immune responses 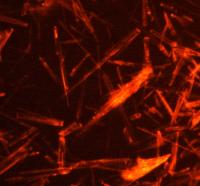