Turquoise is an icon of the desert Southwest, with enduring cultural significance, especially for Native American communities. Yet, relatively little is known about the early history of turquoise procurement and exchange in the region.

University of Arizona researchers are starting to change that by blending archaeology and geochemistry to get a more complete picture of the mineral's mining and distribution in the region prior to the 16th-century arrival of the Spanish.

In a new paper, published in the November issue of the Journal of Archaeological Science, UA anthropology alumnus Saul Hedquist and his collaborators revisit what once was believed to be a relatively small turquoise mine in eastern Arizona. Their findings suggest that the Canyon Creek mine, located on the White Mountain Apache Indian Reservation, was actually a much more significant source of turquoise than previously thought.

With permission from the White Mountain Apache Tribe, Hedquist and his colleagues visited the now essentially exhausted Canyon Creek source -- which has been known to archaeologists since the 1930s -- to remap the area and collect new samples. There, they found evidence of previously undocumented mining areas, which suggest the output of the mine may have been 25 percent higher than past surveys indicated.

"Pre-Hispanic workings at Canyon Creek were much larger than previously estimated, so the mine was clearly an important source of turquoise while it was active," said Hedquist, lead author of the paper, who earned his doctorate from the UA School of Anthropology in the College of Social and Behavioral Sciences in May.

In addition, the researchers measured ratios of lead and strontium isotopes in samples they collected from the mine, and determined that Canyon Creek turquoise has a unique isotopic fingerprint that distinguishes it from other known turquoise sources in the Southwest. The isotopic analysis was conducted in the lab of UA College of Science Dean Joaquin Ruiz in the Department of Geosciences by study co-author and UA geosciences alumna Alyson Thibodeau. Now an assistant professor at Dickinson College in Pennsylvania, Thibodeau did her UA dissertation on isotopic fingerprinting of geological sources of turquoise throughout the Southwest.

"If you pick up a piece of turquoise from an archaeological site and say 'where does it come from?' you have to have some means of telling the different turquoise deposits apart," said David Killick, UA professor of anthropology, who co-authored the paper with Hedquist, Thibodeau and John Welch, a UA alumnus now on the faculty at Simon Fraser University. "Alyson's work shows that the major mining areas can be distinguished by measurement of major lead and strontium isotopic ratios."

Based on the isotopic analysis, researchers were able to confidently match turquoise samples they collected at Canyon Creek to several archaeological artifacts housed in museums. Their samples matched artifacts that had been uncovered at sites throughout much of east-central Arizona -- some more than 100 kilometers from the mine -- suggesting that distribution of Canyon Creek turquoise was broader than previously thought, and that the mine was a significant source of turquoise for pre-Hispanic inhabitants of the Mogollon Rim area.

The researchers also were able to pinpoint when the mine was most active. Their samples matched artifacts found at sites occupied between A.D. 1250-1400, suggesting the mine was primarily used in the late 13th and/or 14th centuries.

"Archaeologists have struggled for decades to find reliable means of sourcing archaeological turquoise -- linking turquoise artifacts to their geologic origin -- and exploring how turquoise was mined and traded throughout the greater pre-Hispanic Southwest," said Hedquist, who now lives in Tempe, Arizona, and works as an archaeologist and ethnographer for Logan Simpson Inc., a cultural resources consulting firm. "We used both archaeology and geochemistry to document the extent of workings at the mine, estimate the amount of labor spent at the mine and identify turquoise from the mine in archaeological assemblages."

Turquoise is a copper mineral, found only immediately adjacent to copper ore deposits. While detailed documentation of pre-Hispanic turquoise mines is limited, the work at Canyon Creek could pave the way for future investigations.

"I think our study raises the bar a bit by combining archaeological and geochemical analyses to gain a more complete picture of operations at one mine: when it was active, how intensely it was mined and how its product moved about the landscape," Hedquist said. "Researchers have only recently developed a reliable means of sourcing the mineral, so there's plenty of potential for future research."

Similar work involving the UA is already underway to explore the origin of turquoise artifacts found at the Aztec capital of Tenochtitlan in Mexico.

"Canyon Creek is but one of many ancient turquoise mines," Hedquist said. "This study provides a standard for the detailed documentation of ancient mineral procurement and a framework for linking archaeological turquoise to specific geologic locations. Building on other archaeological patterns -- the circulation of pottery and flaked stone artifacts, for example -- we can piece together the social networks that facilitated the ancient circulation of turquoise in different times and places."

A better understanding of the pre-Hispanic history of turquoise is important not only to archaeologists and mining historians but to modern Native Americans, Killick said.

"It's of great interest to modern-day Apache, Zuni and Hopi, whose ancestors lived in this area, because turquoise continues to be ritually important for them," he said. "They really have shown a great deal of interest in this work, and they've encouraged it." 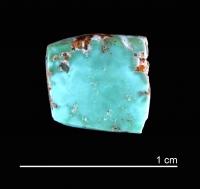 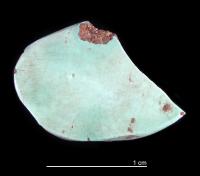