While the new Coronavirus will, hopefully, be effectively controlled sooner rather than later, its latest namesake is here to stay - a small caddisfly endemic to a national park in Kosovo that is new to science.

Potamophylax coronavirus was collected near a stream in the Bjeshkët e Nemuna National Park in Kosovo by a team of scientists, led by Professor Halil Ibrahimi of the University of Prishtina. After molecular and morphological analyses, it was described as a caddisfly species, new to science in the open-access, peer-reviewed Biodiversity Data Journal.

Ironically, the study of this new insect was impacted by the same pandemic that inspired its scientific name. Although it was collected a few years ago, the new species was only described during the global pandemic, caused by SARS-CoV-2. Its name, P. coronavirus, will be an eternal memory of this difficult period.

In a broader sense, the authors also wish to bring attention to "another silent pandemic occurring on freshwater organisms in Kosovo's rivers," caused by the pollution and degradation of freshwater habitats, as well as the activity increasing in recent years of mismanaged hydropower plants. Particularly, the river basin of the Lumbardhi i Deçanit River, where the new species was discovered, has turned into a 'battlefield' for scientists and civil society on one side and the management of the hydropower plant operating on this river on the other.

The small insect order of Trichoptera, where P. coronavirus belongs, is very sensitive to water pollution and habitat deterioration. The authors of the new species argue that it is a small-scale endemic taxon, very sensitive to the ongoing activities in Lumbardhi i Deçanit river. Failure to understand this may drive this and many other species towards extinction.

Interestingly, in the same paper, the authors also identified a few other new species from isolated habitats in the Balkan Peninsula, which are awaiting description upon collection of further specimens. The Western Balkans and especially Kosovo, have proved to be an important hotspot of freshwater biodiversity. Several new insect species have been discovered there in the past few years, most of them being described by Professor Halil Ibrahimi and his team. 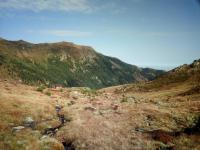 The Locality Where the New Species Potamophylax Coronavirus Was Found