Coffee is very popular around the world despite or perhaps because of its bitter taste. Compounds contained in the coffee such as caffeine contribute to the bitterness to varying degrees. A recent study conducted by the Leibniz-Institute for Food Systems Biology and the Technical University of Munich (TUM) provides new insights into the molecular interactions between bitter substances and bitter receptors. This is of relevance not only for taste perception.

Caffeine is surely the best-known bitter coffee constituent. However, this stimulating substance is not solely responsible for the bitter taste of the beverage. The latest findings from a study conducted by the Freising team of scientists confirm this. Using a cell-based testing system - a type of artificial tongue - and docking analyses, the team investigated five different bitter coffee constituents. The tests included the bitter substance mozambioside identified in Arabica beans, its roast product bengalensol, and the well-known coffee compounds cafestol, kahweol, and caffeine.

Based on the results of their study, the research team assumes that mainly two of the 25 human bitter taste receptors respond to the coffee's constituents. Whereas a relatively high concentration of caffeine is necessary to stimulate the receptors TAS2R46 and TAS2R43, considerably smaller amounts of the other four substances are needed. The caffeine concentration required to activate the bitter taste receptor TAS2R43 to the same degree as mozambioside or bengalensol was about 30 and 300 times higher, respectively, says lead author Tatjana Lang from the Leibniz-Institute for Food Systems Biology.

Further studies conducted by the researchers suggest that the bitter substances contained in coffee interact with each other. These studies showed that kahweol and mozambioside exhibit similar binding properties for the bitter taste receptor TAS2R43. Compared to mozambioside, however, kahweol receptor activation was relatively weak and, depending on the dose, was capable of inhibiting the mozambioside-induced activation of the bitter taste receptor. "We therefore assume that kahweol can reduce the bitter taste elicited by TAS2R43 by suppressing more effective bitter substances at the receptor," says principal investigator Maik Behrens, who is head of the research group Taste Systems Reception & Biosignals at the Leibniz-Institute.

Behrens adds that this effect could play a role in coffee preparations that do not include a filtering step like espresso or Turkish coffee, which are beverages that contain kahweol.

Behrens says the study results are exciting from another perspective as well, adding that: "All of our findings indicate that bitter coffee substances quite specifically activate two of the 25 bitter taste receptors. We furthermore know that both types of receptors are present not only in taste cells. TAS2R43 is also present in the stomach and in conjunction with caffeine plays a role in the regulation of gastric acid secretion. The question now arises as to how coffee constituents like bengalensol, which activate the receptor with much higher potency, might be involved in this regulatory process."

It is also interesting that many people do not possess the bitter taste receptor TAS2R43 due to a genetic variation. This could explain the differences in individual coffee taste perception or its tolerability says Veronika Somoza, director of the Leibniz-Institute for Systems Biology. She adds that much more research is needed to elucidate the complex interaction of bitter substances, bitter receptors, and their effects on the human body.

New review of the role of tastants and their receptors in the modulation of digestive and metabolic functions. To read more go to:

The stimulating bitter substance caffeine can both stimulate and inhibit the secretion of hydrochloric acid in the stomach, depending on whether it activates bitter taste receptors in the stomach or in the mouth. To read more go to:

Journal of Agricultural and Food Chemistry 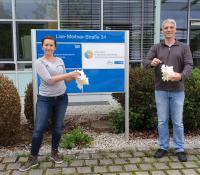