Ultrasound scans of faces in utero can distinguish between when a fetus yawns and when it just opens its mouth, according to research published November 28 in the open access journal PLOS ONE by Nadja Reissland from the University of Durham and colleagues at other institutions.

The study suggests that trends in yawning behavior may potentially be used to track healthy fetal development. Reissland says, "Fetus yawning is not contagious, nor do they yawn because they are "sleepy". Instead, frequency of yawning in the womb might be related to activity-dependent brain maturation early in gestation." 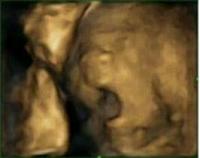