Humans aren't the only primates who like smelling nice for their dates. In the journal Current Biology on April 16, scientists report that male ring-tailed lemurs (Lemur catta) become more attractive to females by secreting a fruity and floral aroma from their wrists. Using detailed chemical analysis, the researchers identified three compounds responsible for this sweet scent, marking the first time that pheromones have been identified in a primate.

"During the yearly breeding season, male lemurs rub the glands on their wrists against their fluffy tails and then wave them at females in a behavior called 'stink flirting,'" says senior author Kazushige Touhara, professor and biochemist at the University of Tokyo.

Ring-tailed lemurs have well-developed scent glands on their shoulders and wrists. These glands are typically used to designate social rank, territory, and reproductive status. However, behavioral observations show they also use their scent glands to catch the attention of females. "Since only ring-tailed lemurs have these wrist glands and exhibit 'stink flirting' behavior, we reasoned that specific odorants for sexual communication must be involved," Touhara says.

At the Japanese Monkey Center (JMC) in Aichi and The Research Institute of Evolutionary Biology in Tokyo, Japan, Touhara and his team tracked the behavior of a conspiracy of ring-tailed lemurs. They observed that female lemurs sniffed the scent markings left by males more often and for longer periods of time during the breeding season--when females are sexually receptive. Furthermore, when researchers isolated the primate perfume from four males and presented it to females individually, they found that females sniffed the fruity-smelling odor for roughly twice as long as the bitter-smelling gland secretions produced off-season.

"Females sniff the floral and fruity scent for a few more seconds than the controls and occasionally even lick it. Although this sounds like a very short time, it's enough to recognize or evoke curiosities in the male," says Touhara.

Using gas chromatography-mass spectrometry analysis on the of the wrist-gland secretions produced during breeding and non-breeding seasons, Touhara determined the major chemical components making up the male scents. Three aldehyde compounds--dodecanal, 12-methyltridecanal, and tetradecanal--were present in both odors but showed substantially higher concentrations during the breeding season. Moreover, when the compounds were individually presented to females in the JMC enclosure, researchers found that only the mixture of all three had a significant ability to hold a female's attention.

"All three compounds have been suggested to be involved in the recognition of newborn sheep by their mothers, and tetradecanal is known as a sex pheromone in some insect species. Although this is the first time 12-methyltridecanal has been identified in primate species, all three aldehydes appear to be used as communication tools widely throughout the animal kingdom," says Touhara.

Young, sexually mature males naturally produce more of these compounds than their senior male counterparts--most likely because aged males produce less testosterone. Furthermore, scientists have observed that females past their reproductive prime are altogether unimpressed by the fruity-smelling odors males exude. These findings suggest that the three compounds are, indeed, pheromones, but more work is required to determine whether they directly influence sexual behavior. "While we have not examined behavioral changes after the sniff in detail, this is an area for future work to determine whether these pheromones impact mating success."

This work was supported by a Grant-in-Aid for Scientific Research from MEXT Japan, the ERATO Touhara Chemosensory Signal Project from JST Japan, the JST Mirai Program from the JST, and KAKENHI grants from the Japan Society for the Promotion of Science. 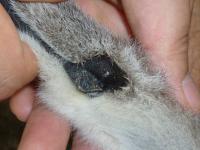 Close up of Lemur Wrist Gland