The Ebola virus is among the deadliest viruses on the planet, killing up to 90% of those infected, and there are no approved vaccines or effective therapies. A study published by Cell Press on May 7th in the Biophysical Journal reveals how the most abundant protein making up the Ebola virus—viral protein 40 (VP40)—allows the virus to leave host cells and spread infection to other cells throughout the human body. The findings could lay the foundation for the development of new drugs and strategies for fighting Ebola infection.

"Little research is available on how the Ebola virus buds from the plasma membrane of human cells," says senior study author Robert Stahelin of Indiana University School of Medicine. "By shedding light on this process, our study will help us to identify potential drug candidates that could interfere with this step in the viral life cycle."

The Ebola virus is made up of seven proteins, including VP40, which plays a key role in enabling the virus to leave host cells and infect other cells in the human body. Past studies have shown that a part of VP40 called the C-terminal domain penetrates the plasma membrane surrounding host cells. But until now, it was not known exactly how VP40 binds to the plasma membrane to allow the virus to escape host cells.

To address this question, Stahelin and his team made vesicles designed to mimic the plasma membrane of host cells and exposed these vesicles to VP40. Observing their interactions under the microscope, they found that VP40's C-terminal domain penetrates more than halfway into one layer of the vesicles. VP40 also caused the vesicle membranes to bend into the shape of the Ebola virus, paving the way for its escape. When the researchers mutated the C-terminal domain of VP40, the protein was much less effective at binding to and bending membranes and forming virus-like particles that could escape from host cells.

Altogether, the findings reveal how VP40's C-terminal domain allows the Ebola virus to spread infection. "Currently, we are trying to find small molecules that can inhibit VP40 interactions with the plasma membrane," Stahelin says. "This effort could lead to the discovery of potential drug candidates that could form the basis of much-needed therapies for this deadly virus." 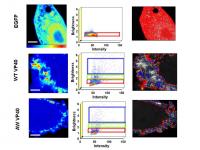 Oligomerization of WT and AW -VP40 in Live CHO Cells