An international team led by researchers from the Evolutionary Studies Institute (ESI) at the University of the Witwatersrand, Johannesburg, has obtained an age from rocks of the Great Karoo that shed light on the timing of a mass extinction event that occurred around 260 million years ago.

This led to the disappearance of a diverse group of early mammal-like reptiles called dinocephalians, which were the largest land-living animals of the time.

The project was led by Dr Michael Day, a postdoctoral fellow at Wits University, and the findings are contained in paper, titled: When and how did the terrestrial mid-Permian mass extinction occur? Evidence from the tetrapod record of the Karoo Basin, South Africa, published today, 8 July 2015, in the latest issue of the Royal Society's biological journal, Proceedings of the Royal Society B.

The Karoo is very rich in fossils of terrestrial animals from the Permian and Triassic geological periods, which makes it one of the few places to study extinction events on land during this time. As a result South Africa's Karoo region provides not only a historical record of biological change over a period of Earth's history but also a means to test theories of evolutionary processes over long stretches of time.

By collecting fossils in the Eastern, Western and Northern Cape Provinces the team was able to show that around 74-80% of species became extinct along with the dinocephalians in a geologically short period of time.

The new date was obtained by high precision analyses of the relative abundance of uranium and lead in small zircon crystals from a volcanic ash layer close to this extinction horizon in the Karoo.

This provides a means of linking the South African fossil record with the fossil record in the rest of the world. In particular, it helps correlate the Karoo with the global marine record, which also records an extinction event around 260 million years ago.

"A mid-Permian extinction event on land has been known for some time but was suspected to have occurred earlier than those in the marine realm. The new date suggests that one event may have affected marine and terrestrial environments at the same time, which could mean its impact was greater than we thought," says Day.

The mid-Permian extinction occurred near the end of what geologists call the Guadalupian epoch that extended from 272.3 to around 259.1 million years ago. It pre-dated the massive and much more famous end-Permian mass extinction event by 8 million years.

"The South African Karoo rocks host the richest record of middle Permian land-living vertebrate animals. This dataset, the culmination of 30 years of fossil collecting and diligent stratigraphic recording of the information, for the first time provides robust fossil and radioisotopic data to support the occurrence of this extinction event on land," says Day.

"The exact age of the marine extinctions remains uncertain," says Jahandar Ramezani of Massachusetts Institute of Technology and who was responsible for dating the rocks, "but this new date from terrestrial deposits of the Karoo, supported by palaeontological evidence, represents an important step towards a better understanding of the mid-Permian extinction and its effect on terrestrial faunas."

Michael Day is a postdoctoral fellow at the Evolutionary Studies Institute at Wits University. He did his undergraduate studies at universities in Bristol and Sheffield before completing his PhD in Palaeontology at Wits in 2013. During his research he has been on over a dozen fieldtrips to the Great Karoo to collect fossils and study the rock successions. This has taken him to five provinces of South Africa, and then to conferences in the US and South Africa to talk about his research.

Jahandar Ramezani is a research scientist in the Isotope Geology Laboratory at MIT, where he applies high-precision U-Pb geochronology to problems in stratigraphic record and regional geology. He combines geochronology with depositional history of continental sedimentary basins and vertebrate biostratigraphy in order to better understand the tempo of animal evolution on land. He pursued his graduate studies at the Memorial University of Newfoundland and Washington University in St. Louis where he was awarded a PhD in 1997.

Samuel Bowring is director of the Isotope Geology Laboratory at MIT. His pioneering geochronologic investigations have advanced our understanding of major episodes in the history of Earth and its biosphere, such as the early Cambrian evolutionary explosion and the end-Permian mass extinction. He earned his PhD from University of Kansas in 1985 and is a member of the US National Academy of Sciences.

Peter Sadler studied at Bristol and Göttingen Universities. His work at the University of California concerns patchiness of the fossil record. From the way that net accumulation rate varies with averaging time - now called "the Sadler Effect" - he infers the likelihood of gaps in fossil-bearing strata. His CONOP algorithms, awarded the 2012 quadrennial Stratigraphy Prize of the International Commission on Stratigraphy, mitigate the gaps by combining records from many localities.

Douglas Erwin is a senior scientist in the Department of Paleobiology at the National Museum of Natural History in Washington, DC (US). He studies large-scale evolutionary events such as the Ediacaran-Cambrian diversification of animals and the end-Permian mass extinction. Research projects have brought him to South Africa and Namibia many times, as well as China, Australia and elsewhere.

Fernando Abdala is a senior researcher at the Evolutionary Studies Institute at Wits University. He began his academic career at the Universidad Nacional de Tucuman in northwestern of Argentina where he obtained a Licentiate and PhD in Biological Sciences, specialising in palaeontology. His research focusses on the taxonomy, ontogeny, evolution and palaeobiogeography of therapsids in Gondwana, particularly the Permo-Triassic non-mammaliaform cynodonts from Argentina, Brazil and Africa. He has recently become interested in systematics and evolution of therocephalians from southern Africa, as well as basal therapsids such as early anomodonts and dinocephalians from the Middle Permian of Brazil.

Bruce Rubidge is the Director of the DST/NRF Centre of Excellence for Palaeosciences in South Africa and Interim Director of Evolutionary Studies Institute at Wits University. His research specialty is vertebrate palaeontology (particularly basal therapsids) as well as stratigraphy and basin development of Karoo-aged rocks of southern Africa. For the past 30 years he has been researching biodiversity changes of land-living vertebrates during the Middle Permian based largely on the fossil record from the Karoo. Research collaborations have taken him to fossil vertebrate collections and sedimentary basins in Africa Europe, Asia, Australia, and North and South America. 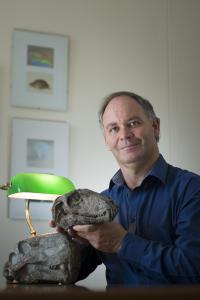 Bruce Rubidge, University of the Witwatersrand