A new kind of sensor could warn emergency workers when carbon filters in the respirators they wear to avoid inhaling toxic fumes have become dangerously saturated.

In a recent issue of the journal Advanced Materials, a team of researchers from the University of California, San Diego and Tyco Electronics describe how they made the carbon nanostructures and demonstrate their potential use as microsensors for volatile organic compounds.

First responders protect themselves from such vapors, whose composition is often unknown, by breathing through a canister filled with activated charcoal – a gas mask. Airborne toxins stick to the carbon in the filter, trapping the dangerous materials.

As the filters become saturated, chemicals will begin to pass through. The respirator can then do more harm than good by providing an illusion of safety. But there is no easy way to determine when the filter is spent. Current safety protocols base the timing of filter changes on how long the user has worn the mask.

"The new sensors would provide a more accurate reading of how much material the carbon in the filters has actually absorbed," said team leader Michael Sailor, professor of chemistry and biochemistry and bioengineering at UC San Diego. "Because these carbon nanofibers have the same chemical properties as the activated charcoal used in respirators, they have a similar ability to absorb organic pollutants."

Sailor's team assembled the nanofibers into repeating structures called photonic crystals that reflect specific wavelengths, or colors, of light. The wing scales of the Morpho butterfly, which give the insect its brilliant iridescent coloration, are natural examples of this kind of structure.

The sensors are an iridescent color too, rather than black like ordinary carbon. That color changes when the fibers absorb toxins – a visible indication of their capacity for absorbing additional chemicals.

The agency that certifies respirators in the U.S., the National Institute of Occupational Safety and Health, has long sought such a sensor but the design requirements for a tiny, sensitive, inexpensive device that requires little power, have proved difficult to meet.

The materials that the team fabricated are very thin – less than half the width of a human hair. Sailor's group has previously placed similar photonic sensors on the tips of optical fibers less than a millimeter across and shown that they can be inserted into respirator cartridges. And the crystals are sensitive enough to detect chemicals such as toluene at concentrations as low as one part per million.

Ting Gao, a senior researcher at the Polymers, Ceramics, and Technical Services Laboratories of Tyco Electronics in Menlo Park, California and Timothy L. Kelly, a NSERC post-doctoral fellow at UC San Diego co-authored the paper. The National Science Foundation, the Department of Homeland Security, the Natural Sciences and Engineering Research Council of Canada, and TYCO Electronics provided funding for the work. 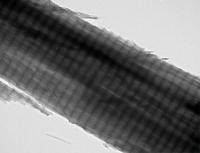