Harvey's intensification has been aided by movement through an environment that includes low vertical wind shear and the warm waters in the Gulf of Mexico.

The Global Precipitation Mission (GPM) core observatory satellite flew almost directly above intensifying Hurricane Harvey on August 24, 2017 at 6:30 p.m. EDT (2230 UTC) when maximum sustained winds had increased to about 86 mph (75 knots). GPM's Microwave Imager (GMI) instrument peered through dense storm clouds to reveal the location of intense rainfall bands near the center of the hurricane. The Goddard Profiling Algorithm (GPROF), using GMI data, indicated that powerful storms in the hurricane were dropping rain at a rate of over 2.1 inches (54 mm) per hour. GPM is a joint mission between NASA and the Japan Aerospace Exploration Agency, JAXA.

An animation of NOAA's GOES-East satellite infrared and visible imagery from August 23 to August 25 showed the redevelopment and movement of Hurricane Harvey in the western Gulf of Mexico. By today, Aug. 25, Harvey had moved along the coast of southeastern Texas.

In both the center and the band, AIRS detected strong thunderstorms high into the troposphere with very cold cloud top temperatures. Some of the coldest cloud top temperatures exceeded minus 81 degrees Fahrenheit (minus 63 degrees Celsius). Storms with temperatures that cold are high in the troposphere and NASA research has shown they have the ability to generate heavy rain. That heavy rain is in the forecast for Texas and Louisiana, according to the National Hurricane Center (NHC).

Harvey is moving toward the northwest near 10 mph (17 km/h), but its forward speed is expected to decrease significantly during the next couple of days. Maximum sustained winds are near 110 mph (175 kph) with higher gusts. Some strengthening is possible, and Harvey is expected to become a major hurricane before it reaches the middle Texas coast. Hurricane-force winds extend outward up to 35 miles (55 km) from the center, and tropical-storm-force winds extend outward up to 140 miles (220 km).The minimum central pressure reported by the Air Force plane was 950 millibars.

NHC said, the combination of a dangerous storm surge and the tide will cause normally dry areas near the coast to be flooded by rising waters moving inland from the shoreline. The water is expected to reach the following heights above ground if the peak surge occurs at the time of high tide...

The deepest water will occur along the immediate coast near and to the northeast of the landfall location, where the surge will be accompanied by large and destructive waves. Surge-related flooding depends on the relative timing of the surge and the tidal cycle, and can vary greatly over short distances.

Swells generated by Harvey will begin to affect the Texas, Louisiana, and northeast Mexico coasts later this morning. These swells are likely to cause life-threatening surf and rip current conditions

Isolated tornadoes are possible across portions of the middle and upper Texas coast today.

NASA gets an in-depth look at intensifying Hurricane Harvey 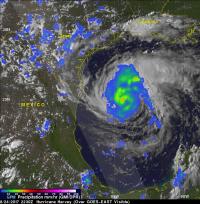 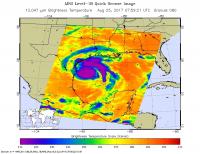