An analysis based on mathematical statistics more precise than those previously carried out uncovered the reason why powdery mildew fungi on Åland are most abundant in roadsides and crossings. Identified as the specific cause was that traffic raises the spores found on roadsides efficiently into the air.

New statistical methods make it possible to identify complex mechanisms in nature that could potentially fundamentally alter our understanding of how diseases spread, among other things.

A recently published study utilised a comprehensive monitoring dataset on fungal diseases and the environmental variables affecting their distribution, collected over several years on Åland by Anna-Liisa Laine, professor of ecology at the University of Helsinki. The findings were published in the PLoS Computational Biology journal.

"Consolidating data collected on the road network, plants and the occurrence of plant diseases is no simple task. It required both new kinds of statistical models and computing power, which were not available only roughly ten years ago," says postdoctoral researcher Elina Numminen from the Department of Mathematics and Statistics, University of Helsinki.

With the adapted statistical model, the researchers were also able to demonstrate how epidemics caused by powdery mildew fungi were usually more extensive and persistent when originating in roadsides compared to epidemics originating in meadows or elsewhere further away from roads.

Plant diseases are common among both wild and cultivated plants, with many plants having a specific powdery mildew fungus of their own. For instance, in the autumn symptoms of such diseases are in evidence on the leaves of many trees.

In this study, the researchers examined on the Åland Islands a powdery mildew fungus that is a common parasite of the ribwort plantain. The fungus is primarily dispersed by wind in the summer, as the small fungal spores fly from one plant to another. To the naked eye, the infection appears as white fungal spore growth covering the plant.

The researchers are interested in disease transmission, as it helps explain the occurrence and biology of diseases. There are plant diseases that spread along riversides, bird migration routes, ocean currents or, for example, air traffic networks, much like human diseases that spread through social networks.

"New techniques in statistical ecology can significantly expand our previous understanding of not only plant diseases but also, say, the distribution of various invasive or threatened species," Numminen notes. What is more, this makes them essential to predicting future environmental change. According to Numminen, distribution and strain estimates may be based on very simple statistical analyses, whose reliability could be boosted by an injection of ecological realism. 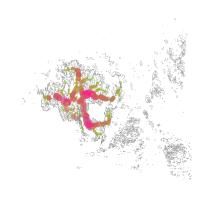