Scientists at The University of Manchester have cast new light on a little understood group of worm infections, which collectively afflicts 1 in 4 people, mainly children - in the developing the world.

According to the Professors Richard Grencis and Ian Roberts, Whipworms - which bury into the large intestine - have their own gut flora which live inside their own intestines which they say help the worm to grow and thrive.

Whipworm, gets its name because it resembles a whip and causes the disease known as trichuriasis. Infection develops after ingesting whipworm eggs from the contaminated soil.

The discovery, published in Science Advances, could pave the way for more effective drug treatments for such worms, which cause debilitating and serious symptoms.

New solutions to the problem are urgently needed as whipworms are more difficult to treat than other worm parasites that live in the gut and resistance to treatment is a worrying problem.

According to the team, the bacteria found in the 2 cm long worm's gut are unexpectedly different from the gut in which they live.

They had previously discovered that the parasites' eggs are stimulated to hatch by the host's gut flora.

But now they find that changes to the host's bacteria caused by the infection enhance the worms' survival by reducing the numbers of new whipworm eggs that hatch, so keeping their own numbers down.

That, they say, prevents the build-up of infection, which would otherwise lead to host resistance and removal of the worms by the immune system.

It is most common in people who live in regions with hot, humid climates and in areas with poor hygiene and sanitation but was common across temperate climates across the world in past times.

The parasite can cause diarrhoea, vomiting, nausea, anaemia and weight loss as well as delayed growth in children.

Professor Grencis said: "Although whipworm causes widespread problems across the developing world, it's an area which needs much more research, hence being categorised as one of the Neglected Tropical Diseases by the World Health Organisation.

"So we're pleased we've been able to make an important step in our understanding of its biology.

"We hope this will pave the way for badly needed new drugs. There's no time to waste, as resistance to the current treatments is becoming a major problem."

Professor Roberts said: "We already know that our intestinal microflora underpins all aspects of our health.

"But we were amazed to find that whipworms have their own distinct microflora - and that it does the same for them, something we think is unique for these types of parasites.

"This shines a light on the fascinating relationships between the parasites, the host and their intestinal dwelling bacteria.

"But is also shows how the parasite can exploit this relationship to its own ends promoting its own existence.

"Whipworm is particularly difficult to treat with the drugs currently available to doctors, so we hope this study may help identify week links in the parasites' biology to help develop more effective ones."

Worm parasites that live in the intestine are extremely common in man and animals across the globe and are responsible for considerable ill health with hundreds of millions of people and animals often suffering life-long infections. Our work has focused on whipworm, one of the major types of worm that lives in the large intestine of man. This is also where our intestinal microflora which we know is critically important for our health and wellbeing lives. Individuals are continually exposed throughout their life to infectious eggs from the soil and our previous findings showed that the whipworms exploit the intestinal microflora to induce hatching of the parasite eggs when they are swallowed. We now show that once established the worms alter the microflora of the host to make subsequent egg hatching less effective. This prevents the build-up of parasite numbers, which we know can lead to host resistance and removal of the worms by the immune system. In this way the parasite changes the host microflora to enhance its own survival.

Intriguingly, we also were able to show that the parasites themselves have their own microflora within their own intestines. Interestingly and surprisingly, the bacterial populations found in the worm's gut are very different from the gut of the host in which they live. So they change the host gut bacteria to enhance their own survival but need to keep a "good" population of bacteria for their own health. Indeed, without the bacteria in the worms' gut, the worms cannot grow and thrive.

Our work highlights the close and specialised relationships that exist between parasites and their hosts, the importance of the microbiome extending it to incorporate the microbiome of the parasites themselves. This deeper understanding may well lead to the development of new approaches to control parasitic worm infections that have plagued both man and animals for hundreds of thousands of years. 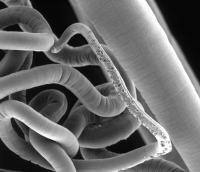 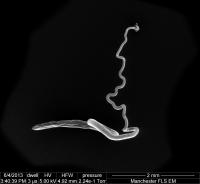