The long-held theory that early human ancestors in East Asia crafted their tools from bamboo and wood is much more complicated than originally conceived, according to a new study.

Research until now has failed to address a fundamental question: Is it even possible to make complex bamboo tools with simple stone tools?

Now an experimental archaeological study — in which a modern-day flint knapper replicated the crafting of bamboo knives — confirms that it is indeed possible to make a variety of bamboo tools with the simplest stone tools.

However, rather than confirming the long-held "bamboo hypothesis," the new research shows there's more to the theory, says archaeologist Metin I. Eren, the expert knapper who crafted the tools for the study.

Bamboo knives were efficiently crafted and able to cut meat, but not hide

The researchers found that crudely knapped stone choppers made from round rock "cobbles" performed remarkably well for chopping down bamboo. In addition, bamboo knives were efficiently crafted with stone tools. While the knives would easily cut meat, they weren't effective at cutting animal hides, however, which could have discouraged their use during the Stone Age, say the authors. Some knives made from a softer bamboo species entirely failed to produce and hold a sharp edge.

"The 'bamboo hypothesis' has been around for quite awhile, but was always represented simply, as if all bamboo species, and bamboo tool-making were equal," says Eren, a doctoral candidate in anthropology at Southern Methodist University in Dallas. "Our research does not debunk the idea that prehistoric people could have made and used bamboo implements, but instead suggests that upon arriving in East and Southeast Asia they probably did not suddenly start churning out all of their tools on bamboo raw materials either."

The findings appear online in the article "Were Bamboo Tools Made in Prehistoric Southeast Asia? An Experimental View from South China," which will be published in an issue of the journal Quaternary International, edited by Parth Chauhan and Rajeev Parnaik.

"The importance of experimental archaeology, of replicating the production of bamboo tools with simple stone artifacts, was needed for a long time. Due to successful cooperation in every stage of the experiments with our Chinese colleagues, we managed to demonstrate the potential of a simple stone tool technology to produce many different daily tools made of bamboo," said archaeologist and lead author Ofer Bar-Yosef, professor of Stone Age archaeology at Harvard University.

In addition to Bar-Yosef and Eren, co-authors were archaeologists Jiarong Yuan and Yiyuan Li of Hunan Provincial Institute of Archaeology and Cultural Relics; and archaeologist David J. Cohen of Boston University.

As in Africa, previous fossil discoveries in East Asia have indicated that early human ancestors continuously inhabited those regions for as much as 1.6 million years. Unlike Africa and western Eurasia, however, where stone tools show increasing and decreasing complexity, East Asia's stone tools remain relatively simple.

Researchers know that simple flaked "cobble" industries existed in some parts of the vast East and Southeast Asia region, which includes present-day China, Brunei, Cambodia, Indonesia, Laos, parts of Malaysia, Myanmar, Philippines, Thailand, East Timor and Vietnam. Stone tool discoveries there have been limited to a few hand axes, cleavers and choppers flaked on one side, however, indicating a lack of more advanced stone tool-making processes, innovation and diversity found elsewhere, say the authors.

The lack of complex prehistoric stone tool technologies has remained a mystery. Some researchers have concluded that prehistoric people in East Asia must have instead crafted and used tools made of bamboo — a resource readily available to them.

Scientists have hypothesized various explanations for the lack of complex stone tools. On one hand, it's been suggested that human ancestors during the early Stone Age left Africa with rudimentary tools and were then cut-off culturally once they reached East Asia, creating a cultural backwater.

Others have suggested a lack of appropriate stone raw materials in East and Southeast Asia. In the new study, however, Bar-Yosef, Eren and colleagues showed otherwise by demonstrating that more complex stone tools could be manufactured on stone perceived to be "poor" in quality.

Prolific in East and Southeast Asia, bamboo stands grow fast and thick, reaching maturity in 5 to 7 years and totaling more than 1,000 species, the authors say.

In a 2007 pilot study and a 2008 expanded study the authors worked with the Archaeological Field Research Station of the Hunan Provincial Institute of Archaeology and Cultural Relics in Shimen, China. Experiments were carried out in three locations across Hunan province known to possess clusters of Paleolithic sites.

The researchers gathered different kinds of cobble-sized rocks along the banks of the Li, Wu and Xiao Shui rivers, similar to those that would have been available to prehistoric human ancestors.

From those rocks, Eren easily replicated flake tools and stone choppers, some of them flaked on one side and some flaked on two sides. The team then observed a local bamboo toolmaker — who used metal tools to easily slice the bamboo — to learn techniques for sawing, shaving, splitting, peeling and chopping bamboo.

Using the crudely knapped stone choppers, the researchers in 84 minutes chopped down 14 bamboo stalks representing five species. When cut, the stalks, both small and large in diameter, totaled more than 65 meters in length. The stone tools performed remarkably well for that purpose, the authors write. That was especially true, they said, considering the tools were wielded by two modern people who were inexperienced with chopping bamboo, researchers Eren and Li. But Eren sometimes found himself scrambling up trees to release felled bamboo wedged in branches.

After numerous trials, the researchers developed a simple "bamboo knife reduction sequence" that could produce 20 sharp, durable bamboo knives in about five hours. Using pork purchased from a local market, the researchers write, they found that the knives easily cut meat, but not hide.

In other findings, the authors write that with a simple stone unifacial chopper, Bar-Yosef was able in 30 minutes to easily make a sharp spear that would have been capable of killing an animal. Also, using the replicated stone tools they were able to produce strips of bamboo thin enough for weaving baskets. "For some items, like baskets, bamboo might have been an ideal raw material," Eren said.

"But one is left to wonder, at least for butchery tasks, why a prehistoric person would go to the trouble of producing a bamboo knife when a stone flake would certainly do the trick," the authors write.

To see a video by the researchers showing the process of using simple stone tools to make a bamboo knife, click on the following link: http://www.youtube.com/watch?v=Q6yJmu5EzJA

Funding for the research was from the American School of Prehistoric Research, Harvard University; a National Science Foundation Graduate Research Fellowship; and the Department of Anthropology, Southern Methodist University.

SMU has an uplink facility located on campus for live TV, radio, or online interviews. To speak with Metin Eren or book him in the studio, call SMU News & Communications at 214-768-7650. 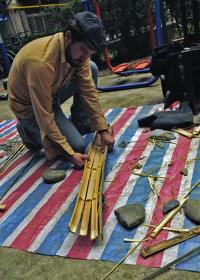