Unseen out in the ocean, countless single-celled organisms grow protective shells to keep them safe as they drift along, living off other tiny marine plants and animals. Taken together, the shells are so plentiful that when they sink they provide one of the best records for the history of ocean chemistry.

Oceanographers at the University of Washington and the University of California, Davis, have used modern tools to provide an atomic-scale look at how that shell first forms. Results could help answer fundamental questions about how these creatures grow under different ocean conditions, in the past and in the future. The study is published this week in the Proceedings of the National Academy of Sciences.

"There's this debate among scientists about whether shelled organisms are slaves to the chemistry of the ocean, or whether they have the physiological capacity to adapt to changing environmental conditions," said senior author Alex Gagnon, a UW assistant professor of oceanography.

The new work shows, he said, that they do exert some biologically-based control over shell formation.

"I think it's just incredible that we were able to peer into the intricate details of those first moments that set how a seashell forms," Gagnon said. "And that's what sets how much of the rest of the skeleton will grow."

The results could eventually help understand how organisms at the base of the marine food chain will respond to more acidic waters. And while the study looked at one organism, Orbulina universa, which is important for understanding past climate, the same method could be used for other plankton, corals and shellfish.

The study used tools developed for materials science and semiconductor research to view the shell formation in the most detail yet to see how the organisms turn seawater into solid mineral.

"We're interested more broadly in the question 'How do organisms make shells?'" said first author Oscar Branson, a former postdoctoral researcher at the University of California, Davis who is now at Australian National University in Canberra. "We've focused on a key stage in mineral formation -- the interaction between biological template materials and the initiation of shell growth by an organism."

These tiny single-celled animals, called foraminifera, can't reproduce anywhere but in their natural surroundings, which prevents breeding them in captivity. The researchers caught juvenile foraminifera by diving in deep water off Southern California. Then they then raised them in the lab, using tiny pipettes to feed them brine shrimp during their weeklong lives.

Marine shells are made from calcium carbonate, drawing the calcium and carbon from surrounding seawater. But the animal first grows a soft template for the mineral to grow over. Because this template is trapped within the growing skeleton, it acts as a snapshot of the chemical conditions during the first part of skeletal growth.

To see this chemical picture, the authors analyzed tiny sections of foraminifera template with a technique called atom probe tomography at the Pacific Northwest National Laboratory. This tool creates an atom-by-atom picture of the organic template, which was located using a chemical tag.

Results show that the template contains more magnesium and sodium atoms than expected, and that this could influence how the mineral in the shell begins to grow around it.

"One of the key stages in growing a skeleton is when you make that first bit, when you build that first bit of structure. Anything that changes that process is a key control point," Gagnon said.

The clumping suggests that magnesium and sodium play a role in the first stages of shell growth. If their availability changes for any reason, that could influence how the shell grows beyond what simple chemistry would predict.

"We can say who the players are -- further experiments will have to tell us exactly how important each of them is," Gagnon said.

Follow-up work will try to grow the shells and create models of their formation to see how the template affects growth under different conditions, such as more acidic water.

"Translating that into, 'Can these forams survive ocean acidification?' is still many steps down the line," Gagnon cautioned. "But you can't do that until you have a picture of what that surface actually looks like."

The researchers also hope that by better understanding the exact mechanism of shell growth they could tease apart different aspects of seafloor remains so the shells can be used to reconstruct more than just the ocean's past temperature. In the study, they showed that the template was responsible for causing fine lines in the shells -- one example of the rich chemical information encoded in fossil shells.

"There are ways that you could separate the effects of temperature from other things and learn much more about the past ocean," Gagnon said.

For more information, contact Gagnon at 206-543-5627 or gagnon@uw.edu and Branson at obranson@ucdavis.edu. 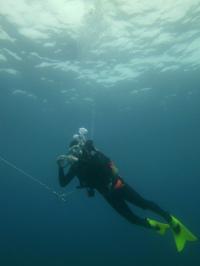