Researchers have warned of an 'urgent worldwide need' to address a broad spectrum of cascading impacts of glacier mass loss on downstream systems.

In their paper, published in Proceedings of the National Academy of Sciences, the authors synthesised currently available evidence and documented the profound impact on freshwater and near-shore marine systems. Although the impact of melting glaciers on sea levels has received much attention to date, this 'perspectives' paper outlines other multiple downstream effects of glacier change that will have significant societal implications. As such, the authors call for a renewed focus on planning adaptation and mitigation measures for the breadth of impacts in all affected regions.

Glaciers cover close to 10% of the Earth's land surface but are shrinking rapidly across most parts of the world. The area of land occupied by glaciers will decrease significantly by the end of the present century. The largest individual contributions to global glacier mass loss come from the glaciers of the Gulf of Alaska, the Canadian Arctic, and the ice sheet peripheries of Greenland and Antarctica.

However, the glaciers with the most negative mass balances are located in the European Alps and at low latitudes in the South American Andes. In the European Alps, atmospheric warming has been pronounced in the last 30 years, especially during the summer months, which when combined with decreased snowfall, has led to a 54% loss of ice area since 1850. Current projections suggest that just 4-13% of the 2003 European Alps ice area will remain by 2100.

The changes in river hydrology and morphology due to climate-induced glacier loss are projected to be the greatest of any hydrological system. There will be significant changes to flow regimes in glacierised watersheds, with a shift to greater stochasticity as glacial runoff decreases and flow becomes more dependent on unpredictable precipitation events and snow melt. Glacier shrinkage will alter sediment transport, and biogeochemical and contaminant fluxes from rivers to oceans.

An unexpected impact of glacier shrinkage is the liberation of contaminants including emission products from industrial activity, such as black carbon and associated compounds, mercury, pesticides, and other persistent organic pollutants. There is uncertainty in the release of these legacy contaminants from glacierised areas, though their transport to downstream systems by meltwater will eventually reduce as glacial ice volume shrinks.

These effects will profoundly influence the natural environment, including many facets of biodiversity, and the ecosystem services that glacier-fed rivers provide to humans, particularly provision of water for agriculture, hydropower and consumption.

Among the major impacts, there are profound changes to ecosystem function and services via altered provision of water resources to human society, reorganization of the regulatory processes that shape water quality and geohazards, and cultural changes associated with tourism, landscape character, and religion.

Lead author Professor Alexander Milner, from the School of Geography, Earth and Environmental Sciences at the University of Birmingham, explained, "We don't believe that the sheer enormity of the impact of glacial shrinkage on our downstream ecosystems has been fully integrated to date. From biodiversity to tourism, from hydropower to clean water supply, the breadth of risk to our current way of life is vast. The first step must be a realignment in how we view glacial shrinkage, and a research agenda that acknowledges the risk to regions likely to be most affected."

Co-author Dr Lee Brown, a freshwater ecologist at the University of Leeds' School of Geography, added: "Suitable management strategies will need to be developed and adopted to mitigate the societal impacts of profound changes in glacial runoff. Careful planning will be needed because, for example, building new reservoirs may solve water supply issues but impact negatively on landscape character and tourism." 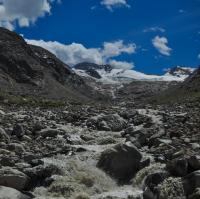