Researchers from the University of Exeter found that the severity of ranavirosis, a devastating disease that kills thousands of frogs each year, increases in the presence of exotic fish. The use of garden chemicals was also associated with increased severity of the disease.

The study, which is published in the journal PLOS ONE, highlights the risks of releasing fish into garden ponds. Fish may amplify viral levels in the environment or cause stress hormone production that reduces immune function in wild frogs.

Lead author Alexandra North from the Environment and Sustainability Institute at the University of Exeter's Penryn Campus in Cornwall said: "Our results show that we can all help limit the impact of this devastating disease. It is important to reduce the use of garden chemicals like slug pellets and weed killers, which weaken the immune systems of frogs, and to stop stocking ponds with non-native species like goldfish. Crucially, people should not move fish, frog spawn, pond weeds or ornaments from one pond to another as this could spread the disease."

The researchers analysed a long term dataset of mortalities in the common frog from across Britain to identify which characteristics were associated with ranavirosis. Since 1992, UK pond owners have reported common frog mass mortality events to the charity Froglife which administers the dataset.

Ranavirus causes systemic haemorrhaging and severe skin ulcers in amphibians which can result in a loss of limbs, and often death. It is thought to have entered the UK via the pet trade and has contributed to the global decline in amphibians.

Dr Amber Griffiths from the Environment and Sustainability Institute at the University of Exeter's Penryn Campus in Cornwall said: "We are currently undergoing a mass extinction of species, and amphibians are particularly under threat. The unprecedented loss of amphibians indicates widespread environmental degradation. The interactions between disease and climate change are deadly. The deeper problem is climate change, but our study shows that people can make an immediate difference by changing their habits in their own gardens".

The study highlights links between disease severity, pond characteristics and garden practices which demonstrate the potential for garden owners to take simple precautions that will help to reduce ranavirosis incidence and severity in the wild across Britain.

The authors will be available for interview from Tuesday 2nd June

The University has four campuses. The Streatham and St Luke's campuses are in Exeter and there are two campuses in Cornwall, Penryn and Truro. The 2014-2015 academic year marks the 10-year anniversary of the two Cornwall campuses. In a pioneering arrangement in the UK, the Penryn Campus is jointly owned and managed with Falmouth University. At the campus, University of Exeter students can study programmes in the following areas: Animal Behaviour, Conservation Biology and Ecology, English, Environmental Science, Evolutionary Biology, Geography, Geology, History, Human Sciences, Marine Biology, Mining and Minerals Engineering, Politics and International Relations, Renewable Energy and Zoology.

The University has invested strategically to deliver more than £350 million worth of new facilities across its campuses in the past few years; including landmark new student services centres - the Forum in Exeter and The Exchange at Penryn - together with world-class new facilities for Biosciences, the Business School and the Environment and Sustainability Institute. There are plans for another £330 million of investment between now and 2016. http://www.exeter.ac.uk/cornwall

About the University of Exeter's Environment and Sustainability Institute (ESI)

The Environment and Sustainability Institute is a £30M interdisciplinary centre, based on the Penryn Campus, undertaking cutting-edge research into solutions to problems of environmental change; in so doing it is enhancing people's lives by improving their relationships with the environment. The ESI has three research themes: clean technologies, natural environment, and social science and sustainability. It is engaging with hundreds of businesses in Cornwall, the Isles of Scilly and beyond to translate its research and expertise across these themes into innovative business practice, products and services.

The ESI building has been designed to achieve a BREEAM 'Outstanding' status, the highest classification available under the BRE Environmental Assessment Method which is the leading and most widely used environmental assessment method for buildings

The ESI was formally opened in April 2013 and has been funded by the European Regional Development Fund Convergence Programme (£22.9M) and the South West Regional Development Agency (£6.6M), with significant support from the Higher Education Funding Council for England.

The University of Exeter and Falmouth University are founding partners in the Combined Universities in Cornwall (CUC), a unique collaboration between six universities and colleges to promote regional economic regeneration through Higher Education, funded mainly by the European Union (Objective One and Convergence), the South West Regional Development Agency and the Higher Education Funding Council for England, with support from Cornwall Council. http://www.exeter.ac.uk/esi 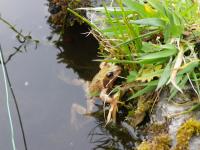