There is a simple rule of thumb. The larger an animal is, the more time it spends eating. This means an elephant hardly has time to sleep. It spends 18 hours every day satisfying its huge appetite. 'This led us to one of the many riddles that gigantism of dinosaurs puts before us,' Professor Martin Sander from the University of Bonn explains. 'They were just so large that a day would have had to have 30 hours so that they were able to meet their energy demands.'

Martin Sander is a spokesman for an international research group which is looking for explanations for this and other paradoxes. The Deutsche Forschungsgemeinschaft (German Research Foundation) has funded the project to date with three million euros. Now the scientists involved have presented the fruits of their work on more than 30 pages in the 'Biological Reviews'. For the first time, their research is offering a plausible answer to the question which the group sought to answer six years ago: why the giant long-neck dinosaurs were even able to exist. The researchers also explain why today's terrestrial animals are nowhere near reaching the Jurassic size record. One reason is that we chew. Giant dinosaurs gulped.

Chewing helps to digest the food faster. By the grinding process it is broken down and at the same time its surface is enlarged. This way the digestive enzymes are able to attack the food more easily. 'Chewing is a property of prototheria which no large herbivorous terrestrial mammal has got rid of,' Martin Sander says. But chewing requires time – a resource that becomes scarce with increasing size. At the same time the following is true: the ones that chew need a large head, since molars and muscles have to be put somewhere. Not without reason elephants are quite big-headed.

However, the herbivorous giant dinosaurs had relatively small, light skulls. Only this fact enabled them to grow extremely long necks. And these again helped them to make food intake as efficient as possible. So they did not constantly have to heave their 80-ton body over the Jurassic savanna while looking for their greens. They just remained on the spot and used their agile neck to browse their surroundings. This was particularly relevant for the heavy-weights. Smaller dinos simply had far smaller necks compared to their body length.

Horsetails were part of the sauropods' diet. For, according to research by the group, they are exceptionally nutritious. However, only a few animals feed off them today. A reason for this is presumably that horsetails are bad for the teeth. They contain a lot of silicate, which acts like sandpaper. But as long as you do not chew them but just pluck them and simply gulp them down, that is no big problem. Scientists from the US have recently discovered that sauropods renewed their teeth exceptionally often, some even in a monthly cycle.

The digestion process itself probably took several days with the giant dinosaurs, due to the missing molars. However, their stomachs were so large that they still provided them with enough energy round the clock. Moreover, the metabolism of these giant animals was incredibly powerful. They possessed amazingly sophisticated lungs, which were far more effective than those of humans. The large number of air sacs which permeated the body cavity and vertebra of the dinosaurs played an important role in their function. Combined with a nifty system of valves they ensured that a gas exchange could take place while breathing in as well as while breathing out. A nice side effect was that the neck got significantly lighter this way. This was important for the statics of the animals.

'In the history of species the lungs of today's birds and of the giant dinosaurs have the same origin,' Martin Sander says. 'This effective air exchange principle was invented about 230 million years ago.' This is consistent with the fact that the earth passed through an oxygen trough at the time. The concentration only 12 to 15 per cent, i.e. a third less than today. So being able to pick out the few oxygen molecules in the thin air as rapidly and well as possible was a huge advantage.

In their article the scientists also deal in detail with further factors, without which the huge herbivores would not have existed. These are inter alia the high reproduction rate which enabled animals even to survive under adverse conditions. As Martin Sander says: '200 million years ago, an unparalleled combination developed of primitive traits, which were new in the history of evolution. This combination made these fascinating giants possible.' 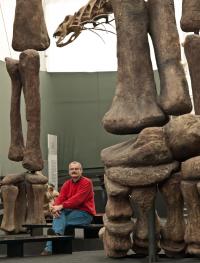 Professor Sander, University of Bonn (2 of 2)