COLUMBIA, Mo. -- Many scientists agree that the best way to learn the anatomy of any species is to utilize donor bodies. However, thousands of junior high, high school and college students, and university researchers do not have access to specific animals. Now, new computer technology is making highly sophisticated biological systems available for viewing by students and researchers. In a new study, a scientist from the University of Missouri's School of Medicine found that 3D computer modeling can complement the study of biological systems for many species.

"We have been able to generate 3D models for the last several years, but very few people are embracing this technology," said Casey Holliday, assistant professor of anatomy at MU. "These computer models are completely and globally available because they are saved as PDF files, which are free to access and share."

Holliday said that biologists have struggled for years to describe or draw complex anatomy structures in two dimensions. However, with the advent of three-dimensional computer models, scientists now have a tool that can be used and shared with other scientific laboratories or with school children who might not have an opportunity to see specific animals up close.

"The one drawback to this technology is how long it can take to 'build' these computer models," Holliday said. "In our study, it took five people about a year to get this model to a point where it was functional, and we only included about 15 structures – muscles, arteries, nerves – in our model. The human hand has at least 35 structures, so we know that it would take a lot of time and effort to build an accurate, functional model of entire biological systems. Once they are completed though, the models can be a fantastic tool to use in the classroom."

Using the technology is simple as Holliday discovered at a recent display for school children. Children as young as 6 and 7 would approach the computer and, within minutes, discover how to manipulate the model and observe the different structures inside an alligator's skull. Holliday says that the technology can be applied to any scientific field where researchers study complex three dimensional structures, such as engineering or plant science.

"The point of our research was to introduce this tool to the scientific world and describe how it can be used in different ways to educate fellow researchers or students," Holliday said. "We still believe that the best way to teach anatomy courses, including human anatomy, is to utilize bodies from donors. However, not everyone has the resources or access to animal or human donors; this is the next best thing. This technology allows us to complement anatomical education, because it can be difficult for students to see every tissue or structure and this software allows us to pick apart the anatomy layer by layer, structure by structure."

Recently, Holliday has received notes from natural resources personnel, veterinarians and others that are using his 3D models for further studies.

"This has a lot of educational value, but it might also help other researchers in important ways," Holliday said. "For every discovery that someone makes, someone else is able to build on that and make another discovery and expand our knowledge about how the world works."

The study, "A 3D Interactive Model and Atlas of the Jaw Musculature of Alligator mississippiensis" has been published recently in PLOS ONE: http://dx.plos.org/10.1371/journal.pone.0062806. 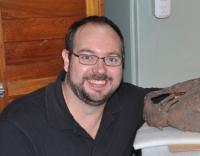 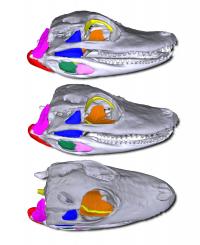