A science team in Antarctica is preparing to loft a balloon-borne instrument to collect information on cosmic rays, high-energy particles from beyond the solar system that enter Earth's atmosphere every moment of every day. The instrument, called the Super Trans-Iron Galactic Element Recorder (SuperTIGER), is designed to study rare heavy nuclei, which hold clues about where and how cosmic rays attain speeds up to nearly the speed of light.

The launch is expected by Dec. 10, weather permitting.

"The previous flight of SuperTIGER lasted 55 days, setting a record for the longest flight of any heavy-lift scientific balloon," said Robert Binns, the principal investigator at Washington University in St. Louis, which leads the mission. "The time aloft translated into a long exposure, which is important because the particles we're after make up only a tiny fraction of cosmic rays."

The most common cosmic ray particles are protons or hydrogen nuclei, making up roughly 90 percent, followed by helium nuclei (8 percent) and electrons (1 percent). The remainder contains the nuclei of other elements, with dwindling numbers of heavy nuclei as their mass rises. With SuperTIGER, researchers are looking for the rarest of the rare -- so-called ultra-heavy cosmic ray nuclei beyond iron, from cobalt to barium.

"Heavy elements, like the gold in your jewelry, are produced through special processes in stars, and SuperTIGER aims to help us understand how and where this happens," said lead co-investigator John Mitchell at NASA's Goddard Space Flight Center in Greenbelt, Maryland. "We're all stardust, but figuring out where and how this stardust is made helps us better understand our galaxy and our place in it."

When a cosmic ray strikes the nucleus of a molecule of atmospheric gas, both explode in a shower of subatomic shrapnel that triggers a cascade of particle collisions. Some of these secondary particles reach detectors on the ground, providing information scientists can use to infer the properties of the original cosmic ray. But they also produce an interfering background that is greatly reduced by flying instruments on scientific balloons, which reach altitudes of nearly 130,000 feet (40,000 meters) and float above 99.5 percent of the atmosphere.

The most massive stars forge elements up to iron in their cores and then explode as supernovas, dispersing the material into space. The explosions also create conditions that result in a brief, intense flood of subatomic particles called neutrons. Many of these neutrons can "stick" to iron nuclei. Some of them subsequently decay into protons, producing new elements heavier than iron.

Supernova blast waves provide the boost that turns these particles into high-energy cosmic rays. As a shock wave expands into space, it entraps and accelerates particles until they reach energies so extreme they can no longer be contained.

Over the past two decades, evidence accumulated from detectors on NASA's Advanced Composition Explorer satellite and SuperTIGER's predecessor, the balloon-borne TIGER instrument, has allowed scientists to work out a general picture of cosmic ray sources. Roughly 20 percent of cosmic rays were thought to arise from massive stars and supernova debris, while 80 percent came from interstellar dust and gas with chemical quantities similar to what's found in the solar system.

"Within the last few years, it has become apparent that some or all of the very neutron-rich elements heavier than iron may be produced by neutron star mergers instead of supernovas," said co-investigator Jason Link at Goddard.

Neutron stars are the densest objects scientists can study directly, the crushed cores of massive stars that exploded as supernovas. Neutron stars orbiting each other in binary systems emit gravitational waves, which are ripples in space-time predicted by Einstein's general theory of relativity. These waves remove orbital energy, causing the stars to draw ever closer until they eventually crash together and merge.

Theorists calculated that these events would be so thick with neutrons they could be responsible for most of the very neutron-rich cosmic rays heavier than nickel. On Aug. 17, NASA's Fermi Gamma-ray Space Telescope and the National Science Foundation's Laser Interferometer Gravitational-wave Observatory detected the first light and gravitational waves from crashing neutron stars. Later observations by the Hubble and Spitzer space telescopes indicate that large amounts of heavy elements were formed in the event.

"It's possible neutron star mergers are the dominant source of heavy, neutron-rich cosmic rays, but different theoretical models produce different quantities of elements and their isotopes," Binns said. "The only way to choose between them is to measure what's really out there, and that's what we'll be doing with SuperTIGER." 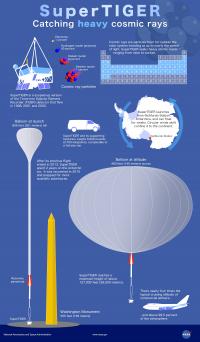