Madagascar's Cat-sized greater bamboo lemurs are considered one of the most endangered primate species on Earth. They almost exclusively eat a single species of bamboo, including the woody trunk, known as culm. But they prefer the more nutritious and tender bamboo shoots and use their specialized teeth to gnaw on culm only when necessary, during the dry season.

Now, reporting in Current Biology on October 26, researchers provide evidence to suggest that as Earth's climate changes, bamboo lemurs will gradually be forced to eat culm for longer periods. Ultimately, they suggest that, based on an analysis of anatomical, behavioral, paleontological, and climate data, the lemurs could slowly starve.

"For extreme feeding specialists like the greater bamboo lemur, climate change can be a stealthy killer," says Patricia Wright at Stony Brook University, one of the authors. "Making the lemurs rely on a suboptimal part of their food for just a bit longer may be enough to tip the balance from existence to extinction."

Wright and her colleagues from Finland and Australia first showed that the greater bamboo lemurs are equipped with highly complex and specialized teeth, just like giant pandas -- the only other mammal capable of feeding on culm. These teeth make it possible for them to consume and survive on woody culm for parts of the year.

To find out more about the greater bamboo lemurs' feeding habits, the researchers spent hours watching them in their natural habitat in Madagascar's Ranomafana National Park over a period of 18 months. They collected more than 2,000 feeding observations in total. Those data showed that the lemurs spend 95 percent of their feeding time eating a single species of woody bamboo. But they only eat the culm from August to November, when dry conditions make tender shoots unavailable.

An analysis of the greater bamboo lemur's current distribution on the island of Madagascar compared to its distribution in the past, as inferred from fossils, suggests that the lemurs used to live over a broader range. The bamboo lemurs remain only in parts of the island where the dry season is relatively short. In other words, it appears that a short dry season has been crucial to the survival of greater bamboo lemurs in the past.

But the researchers have bad news: climate models suggest that the areas where the lemurs currently are found are likely to experience longer and longer dry seasons in the future. As the lemurs are left with only culm to eat for longer periods, it could put their survival at risk.

The findings may have implications for understanding the fate of bamboo-feeding giant pandas, too, the researchers say. Giant pandas are threatened by deforestation and changes in the distribution of bamboo. But the new data suggest that a changing climate may also endanger bamboo feeders in a more subtle way, by affecting the seasonal availability of preferred and more nutritious bamboo parts. Other animals with highly specialized diets may prove similarly vulnerable.

"By studying specialists like the greater bamboo lemur, we can identify the different ways that climate change can cause extinction," says author Jukka Jernvall at University of Helsinki. "And if we do not study these endangered species now, they may go extinct before we know all the reasons why, and we'll be less able to protect what remains."

The researchers say they now hope that this expanded understanding of the greater bamboo lemurs, together with climate predictions, can be applied to building bamboo corridors, with the goal of connecting isolated lemur populations and expanding their habitats.

This study was supported by the Academy of Finland, Stony Brook University, Marie Curie Actions of the European Union, and the Kone Foundation. 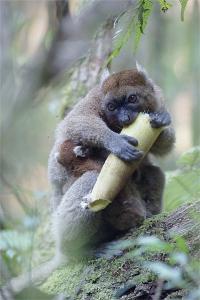 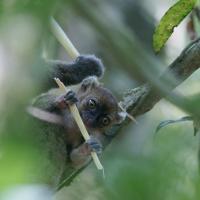