Across Africa, armies of hungry caterpillars destroy the flowers and pods of cowpeas; casualties can reach 80 percent of this staple food crop if no measures are taken. But the real victims are smallholder African farmers who feed their families on farms smaller than five acres. Next year, they will have the option to grow cowpeas that are resistant to one of these pests.

Scientists report in Plant Cell Tissue and Organ Culture that they have engineered cowpea -- one of the most important sources of vegetable protein for rural families in Sub-Saharan Africa -- to produce a Bacillus thuringiensis (Bt) protein, which protects against the Maruca pod borer that plagues cowpea. Bt has been used as an organic pesticide for several decades, but it is often unavailable or too expensive for smallholder farmers.

Bt cowpea could yield as much as 25 percent more than other cowpea varieties, said TJ Higgins, a research scientist at the Commonwealth Scientific and Industrial Research Organisation (CSIRO) who led this work.

Bt cowpea could be released next year -- at no cost -- to farmers in Nigeria, Burkina Faso, and Ghana. In 2009, Higgins began working with colleagues and authorities in West Africa to develop regulatory approval for Bt cowpea.

"Many African farmers do not have to pay for seed, and they will not have to pay anything extra for the Bt cowpea either," Higgins said. "They will be able to save the seed and re-sow it the following year. There are no additional costs because this work has been publicly funded all the way through."

This work was initially supported by the Rockefeller Foundation and then funded consistently for over a decade by USAID, the lead U.S. government agency that works to end extreme global poverty.

"I am to have multiple genes for resistance to the pod borer -- not just one," Higgins said. "There's always a risk that the insects will build up resistance if you've only got one mechanism of action, one arrow if you'd like--I'd like to have two or three arrows. In this paper, we've added another arrow to the repertoire."

Cowpea is one of the orphan crops of the world, despite the fact that at least 200 million people rely on it as a source of protein and energy, Higgins said. "This crop is neglected by commercial companies because while it is an important crop, it is important to some of the world's poorest people," Higgins said. "The sustained funding by USAID is miraculous really, and was greatly needed to realize these new, difficult-to-engineer technologies and get them to farmers in the developing world."

Higgins said everyone is committed to safeguarding this technology through stewardship, or practices that help prevent insects from developing resistance. Management plans have been developed for farmers by the African Agricultural Technology Foundation, a not-for-profit organization that facilitates partnerships to deliver agricultural technologies to smallholder farmers.

Cowpea breeders are also committed to incorporating Bt into their best lines to ensure that this technology keeps pace with yield improvements from traditional breeding.

"There is a widespread belief that only large biotechnology companies can deliver valuable transgenic crops to smallholder farmers," said RIPE Director Stephen Long, Gutgsell Endowed Professor of Crop Sciences and Plant Biology at the Carl R. Woese Institute for Genomic Biology at the University of Illinois. "This public sector collaboration between Australia, Nigeria, and other West African countries shows that with modest support these technologies can reach some of the least well-off farmers in the world, indeed ones where a 25 percent increase may be the difference between insufficient or sufficient food for their families." 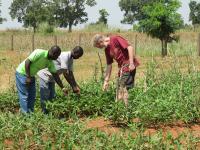