Ecological and societal disruptions by modern climate change are critically determined by the time frame over which climates shift. Camilo Mora and colleagues in the College of Social Sciences' Department of Geography at the University of Hawaii, Manoa have developed one such time frame. The study, entitled "The projected timing of climate departure from recent variability," will be published in the October 10 issue of Nature and provides an index of the year when the mean climate of any given location on Earth will shift continuously outside the most extreme records experienced in the past 150 years.

The new index shows a surprising result. Areas in the tropics are projected to experience unprecedented climates first – within the next decade. Under a business-as-usual scenario, the index shows the average location on Earth will experience a radically different climate by 2047. Under an alternate scenario with greenhouse gas emissions stabilization, the global mean climate departure will be 2069.

"The results shocked us. Regardless of the scenario, changes will be coming soon," said lead author Camilo Mora. "Within my generation, whatever climate we were used to will be a thing of the past."

The scientists calculated the index for additional variables including evaporation, precipitation, and ocean surface temperature and pH. When looking at sea surface pH, the index indicates that we surpassed the limits of historical extremes in 2008. This is consistent with other recent studies, and is explained by the fact that ocean pH has a narrow range of historical variability and because the ocean has absorbed a considerable fraction of human-caused CO2 emissions.

The study found that the overarching global effect of climate change on biodiversity will occur not only as a result of the largest absolute changes at the poles, but also, perhaps more urgently, from small but rapid changes in the tropics.

Tropical species are unaccustomed to climate variability and are therefore more vulnerable to relatively small changes. The tropics hold the world's greatest diversity of marine and terrestrial species and will experience unprecedented climates some 10 years earlier than anywhere else on Earth. Previous studies have already shown that corals and other tropical species are currently living in areas near their physiological limits. The study suggests that conservation planning could be undermined as protected areas will face unprecedented climates just as early and because most centers of high species diversity are located in developing countries

Rapid change will tamper with the functioning of Earth's biological systems, forcing species to either move in an attempt to track suitable climates, stay and try to adapt to the new climate, or go extinct. "This work demonstrates that we are pushing the ecosystems of the world out of the environment in which they evolved into wholly new conditions that they may not be able to cope with. Extinctions are likely to result," said Ken Caldeira of the Carnegie Institution for Science's Department of Global Ecology, and who was not involved in this study. "Some ecosystems may be able to adapt, but for others, such as coral reefs, complete loss of not only individual species but their entire integrity is likely."

These changes will affect our social systems as well. The impacts on the tropics have implications globally as they are home to most of the world's population, contribute significantly to total food supplies, and house much of the world's biodiversity.

In predominately developing countries, over one billion people under an optimistic scenario, and five billion under a business-as-usual-scenario, live in areas that will experience extreme climates before 2050. This raises concerns for changes in the supply of food and water, human health, wider spread of infectious diseases, heat stress, conflicts, and challenges to economies. "Our results suggest that countries first impacted by unprecedented climates are the ones with the least capacity to respond," said coauthor Ryan Longman. "Ironically, these are the countries that are least responsible for climate change in the first place."

"This paper is unusually important. It builds on earlier work but brings the biological and human consequences into sharper focus," said Jane Lubchenco, former Administrator of the National Oceanic and Atmospheric Administration and now of Oregon State University, who was not involved in this study. "It connects the dots between climate models and impacts to biodiversity in a stunningly fresh way, and it has sobering ramifications for species and people."

While the study describes global averages, the authors have visualized their data on an interactive map displaying when climate will exceed historical precedents for locations around the world. "We hope that with this map people can see and understand the progression of climate change in time where they live, hopefully connecting people more closely to the issue and increasing awareness about the urgency to act," said coauthor Abby Frazier.

The index used the minimum and maximum temperatures from 1860-2005 to define the bounds of historical climate variability at any given location. The scientists then took projections for the next 100 years to identify the year in which the future temperature at any given location on Earth will shift completely outside the limits of historical precedents, defining that year as the year of climate departure.

The data came from 39 Earth System Models developed independently by 21 climate centers in 12 different countries. The models have been effective at reproducing current climate conditions and varied in their projected departure times by no more than five years.

The study suggests that any progress to slow ongoing climate change will require a larger commitment from developed countries to reduce emissions, but also more extensive funding of social and conservation programs in developing countries to minimize climate change impacts. The longer we wait, the more difficult remediation will be.

"Scientists have repeatedly warned about climate change and its likely effects on biodiversity and people," said Mora. "Our study shows that such changes are already upon us. These results should not be reason to give up. Rather, they should encourage us to reduce emissions and slow the rate of climate change. This can buy time for species, ecosystems, and ourselves to adapt to the coming changes."

This paper is funded by a grant/cooperative agreement from the National Oceanic and Atmospheric Administration, Project R/IR-25PD, which is sponsored by the University of Hawaii Sea Grant College Program, SOEST, under Institutional Grant No. NA09OAR4170060 from NOAA Office of Sea Grant, Department of Commerce. The views expressed herein are those of the author(s) and do not necessarily reflect the views of NOAA or any of its subagencies. 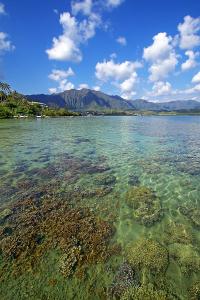