Natural human languages come in two main types based on the modality in which they are expressed and perceived: spoken languages in the oral-aural modality and signed languages in the gestural-visual modality. Although spoken languages and their histories have received the majority of scientific attention, scholars assume that signing, while far less studied, is at least as ancient as speech. "While the evolution of spoken languages has been studied for more than 200 years, research on sign language evolution is still in its infancy," says Justin Power, first author of the study. "Much of what we know about the histories of contemporary sign languages has come from historical accounts of contact between deaf educational institutions and educators. We wanted to know if a comparison of sign languages using contemporary and historical sources could shed light on how European sign languages have developed and spread around the world."

Many of the world's sign languages include a set of manual forms representing a written alphabet, which signers use to spell written words using a sequence of handshapes. Historical examples of such manual alphabets can be found for many sign languages dating back to the establishment of educational institutions for the deaf during the European Enlightenment.

To conduct the study, the researchers began by building an annotated database of 40 contemporary and 36 historical manual alphabets. They then compared the manual alphabets using phylogenetic network methods, which can show varying degrees of relation between many languages at the same time. This allowed them to visualize and understand the complex connections between languages without assuming a priori that commonalities between languages are simply due to common inheritance, as it would be suggested by phylogenetic tree methods. "For this study, we have created the largest cross-linguistic comparative database of sign languages available," says Johann-Mattis List, another of the study's authors. "The database helps us track the evolution of sign languages over the past few centuries, providing a clearer picture about the roots of the contemporary diversity of the world's sign languages."

By adapting methods from historical linguistics and evolutionary biology, the team of scientists was able to infer likely relationships among sign languages. "Despite dealing with fundamentally different data, the analogies between the evolution of sign languages and biological evolution are striking, especially when we look at the gain and loss of lineage-specific traits", notes Guido Grimm, the team's phylogeneticist.

The researchers were able to group the sign languages in the study into five main evolutionary lineages, similar to the usage of phylogenetic networks created in genetic research, revealing how the languages changed as they spread across Europe and into other parts of the world. "The network methods allow us to analyze in detail the complex evolution of complete lineages, manual alphabets, and individual handshapes," adds Power. "Integrating these methods with our research into historical manual alphabets gives us a powerful framework for understanding the evolution of sign languages."

Expansion scenarios trace the dispersal of sign languages through time

The study's results confirmed many of the sign language dispersal events known from the historical record, but the results also turned up several surprises. For instance, the study confirmed the influence of French Sign Language on deaf education and signing communities in many regions, including in Western Europe and the Americas, which scholars have previously emphasized.

However, in addition to confirming these connections, the current study highlights the dispersal of Austrian Sign Language to central and northern Europe, as well as to Russia - a lineage about which little was previously known. "We are very excited about our findings," says Power. "Our interdisciplinary approach combines traditional scholarship with computational phylogenetic methods, and gives us new keys for understanding the evolutionary histories of the world's sign languages." 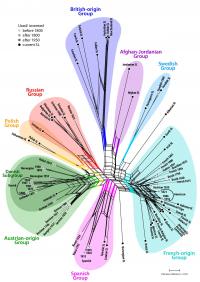