The research team from Purdue University and the Abdus Salam International Centre for Theoretical Physics in Trieste, Italy, found that China, India and the United States - major greenhouse gas-emitting nations that are currently unbound by the Kyoto treaty - face substantial exposure relative to other nations, but that every area of the world faces high exposure in at least one category.

"Climate negotiations have become increasingly concerned not only with who is responsible for climate change, but also who is likely to suffer the most damage," said Noah Diffenbaugh, the Purdue assistant professor of earth and atmospheric sciences who led the study. "Our analysis provides quantitative information to support international negotiations such as those that are taking place in Bali this week. By integrating state-of-the-art global climate model experiments with socioeconomic indicators of poverty, wealth and population, we create a unique measure of 'socioclimatic' risk for each nation."

Filippo Giorgi, vice-chair of Working Group I of the Intergovernmental Panel on Climate Change and head of the Abdus Salam International Center of Theoretical Physics (ICTP) Earth System Physics section, initiated the research and worked closely on the analysis.

"This study goes beyond the physical aspects of climate change - such as increased temperatures, sea-level rise and changes in precipitation patterns - and looks at the interaction of these physical changes with various socioeconomic factors throughout the world," Giorgi said. "A key message is that there are no winners and losers with business-as-usual climate change. Countries in all regions of the world face different - but high - potential exposure to socioclimatic stressors in the 21st century. We hope this message will be heard in the Bali negotiations, as the Nobel Peace Prize ceremony highlights the importance of effective and immediate response to the climate change crisis."

The research will be published online this week in the Proceedings of the National Academy of Sciences.

"Climate change is only half of the story," said Raymond, who also is an associate professor of political science at Purdue. "We need to consider how different societies are threatened by these physical changes in unique ways. Impoverished areas have fewer resources to deal with environmental stress, while wealthy areas have a greater amount of infrastructure that could be lost, and areas with larger populations have more lives at stake."

Michael Mastrandrea, a research associate at the Center for Environmental Science and Policy at Stanford University and member of the Intergovernmental Panel on Climate Change, said this combination of climatic and socioeconomic indicators provides a new method to assess the risks of 21st century climate change and how they vary across nations.

"As this work is developed further, it has the potential to be informative to the international climate policy debate," he said. "The severity of future climate impacts is very sensitive to the pathway of socioeconomic development. This paper proposes an interesting basis from which to quantify the broad implications of concurrent changes in climate and society."

Raymond is currently attending the U.N. conference on climate change in Bali, where he is participating as an official observer of the negotiations.

"Our study is an important first step to get people thinking about the issues from this new perspective," he said. "Of course, famine is a far more serious risk than property damage. But all of these parameters are relevant to policy decisions, and it seems clear that more sophisticated estimates of national exposures to socioclimatic risk will be highly relevant for negotiations of any future climate change agreement."

Regionally, the most exposed nations are China, Bangladesh and Myanmar in Asia; western Sahel and southwestern nations in Africa; Brazil in South America; the eastern United States in North America; and the Mediterranean nations (including France, Italy and Spain), Russia and Scandinavia in Europe.

The study found that the climatic and socioeconomic variables together determine the international variations in socioclimatic risk.

"Patterns emerge that you wouldn't recognize from just looking at either climatic or socioeconomic conditions," Diffenbaugh said. "For example, China has a relatively moderate expected climate change. However, when you combine that with the fact that it has the second largest economy in the world, a substantial poverty rate and a large population, it creates one of the largest combined exposures on the planet. We see similar effects in other parts of the world, including India and the United States, which also have relatively moderate expected climate change. So it's where the socioeconomic and climatic variables intersect that is the key."

He added that the study does not address the absolute degree of impact or risk.

"This study illustrates exposure of one nation relative to another," Diffenbaugh said. "Thus, it is important to note that a country low on the relative scale could still face substantial risk."

The climate models used the A1B scenario, which is a standard greenhouse gas emissions scenario used by the IPCC. However, the authors calculated the exposures based on each degree of global warming, meaning that similar results could be expected from other scenarios, said Xunqiang Bi, a researcher at the ICTP and co-author of the paper.

"Our study leads toward providing integrated, country-based information to aid the development of adaptation and mitigation policies at the national and regional level," Giorgi said. "Much additional work has to be done to account for more comprehensive climatic and socioeconomic information. This is an extremely exciting and innovative area of future research."

The Purdue Climate Change Research Center is affiliated with Purdue's Discovery Park. The center promotes and organizes research and education on global climate change and studies its impact on agriculture, natural ecosystems and society. It was established in 2004 to support Purdue in research and education on regional scale climate change, its impacts and mitigation, and adaptation strategies. The center serves as a hub for a range of activities beyond scientific research, including teaching, public education and the development of public policy recommendations.

The Abdus Salam International Centre for Theoretical Physics was founded in 1964 by Nobel Laureate Abdus Salam. The center operates under a tripartite agreement among the Italian Government and two U.N. agencies, UNESCO and IAEA. Its mission is to foster advanced studies and research, especially in developing countries. While the name of the center reflects its beginnings, its activities today encompass most areas of physical sciences, including geophysical and environmental sciences.

This image illustrates the projected relative "socioclimatic" exposure for each country given expected 21st century climate change. Darkly shaded areas face a greater exposure to climate change based on the metrics of poverty, wealth and population. Purdue researchers and researchers at the Abdus Salam International Centre for Theoretical Physics in Trieste, Italy, have taken a first step toward quantifying the "socioclimatic" exposure of different countries to future climate change. (Illustration by Pamela Burroff-Murr. Map from Diffenbaugh et al., PNAS, 2007. Background photos courtesy of Dan Annarino and NOAA)

A publication-quality image is available at http://news.uns.purdue.edu/UNS/images/+2007/diffenbaugh-socio.jpg

This image illustrates the projected relative exposure for each country given expected 21st century climate change and the estimated levels of poverty and wealth. Darkly shaded areas face a greater exposure to climate change. Purdue researchers and researchers at the Abdus Salam International Centre for Theoretical Physics in Trieste, Italy, have taken a first step toward quantifying the "socioclimatic" exposure of different countries to future climate change. (Map from Diffenbaugh et al., PNAS, 2007)

A publication-quality image is available at http://news.uns.purdue.edu/UNS/images/+2007/diffenbaugh-density.jpg

Abstract on the research in this release is available at: http://news.uns.purdue.edu/x/2007b/071210DiffenbaughSocio.html

STORY AND PHOTO CAN BE FOUND AT: http://news.uns.purdue.edu/x/2007b/071210DiffenbaughSocio.html 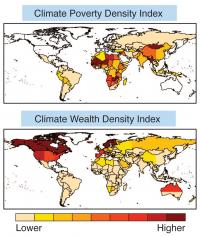 Relative Exposure for Each Country