HOUSTON - (Dec. 18, 2014) - Cars that run on natural gas are touted as efficient and environmentally friendly, but getting enough gas onboard to make them practical is a hurdle. A new study led by researchers at Rice University promises to help.

Rather than shoehorn bulky high-pressure tanks like those used in buses and trucks into light vehicles, the Department of Energy (DOE) encourages scientists to look at new materials that can store compressed natural gas (CNG) at low pressure and at room temperature. Cage-like synthetic macromolecules called metal organic frameworks (MOFs) are among the candidates.

MOFs are nanoscale compounds of metal ions or clusters known as secondary building units (SBUs) and organic binding ligands, or linkers. These linkers hold the SBUs together in a spongy network that can capture and store methane molecules in a tank under pressure. As the pressure is relieved, the network releases the methane for use.

Because there are tens of thousands of possible MOFs, it's a daunting task to synthesize them for testing. Researchers have turned to using computers to model candidates with the right qualities.

A team led by Rice bioengineer Michael Deem went a step further; they used a custom algorithm to not only quickly design new MOF configurations able to store compressed natural gas -- aka methane -- with a high "deliverable capacity," but ones that can be reliably synthesized from commercial precursor molecules. And here's a handy bonus: The algorithm also keeps track of the routes to synthesis.

Deem and his colleagues at Rice, the Lawrence Berkeley National Laboratory and the University of California-Berkeley reported their results this month in the American Chemical Society's Journal of Physical Chemistry C.

MOFs show potential for applications like drug delivery, sensing, purification and catalysis, but methane storage for transportation is high on the DOE's wish list, Deem said. "MOFs are being commercialized for methane storage in vehicles now," he said.

The advantages to using MOF as a storage medium are many and start with increased capacity over the heavy, high-pressure cylinders in current use. The Rice study found 48 MOFs that beat the best currently available, a compound called MOF-5, by as much as 8 percent.

The program adhered to standard DOE conditions that an ideal MOF would store methane at 65 bar (atmospheric pressure at sea level is one bar) and release it at 5.8 bar, all at 298 kelvins (about 77 degrees Fahrenheit). That pressure is significantly less than standard CNG tanks, and the temperature is far higher than liquid natural gas tanks that must be cooled to minus 260 degrees F.

Lower pressures mean tanks can be lighter and made to fit cars better, Deem said. They may also offer the possibility that customers can tank up from household gas supply lines.

The Deem group's algorithm was adapted from an earlier project to identify zeolites. The researchers ran Monte Carlo calculations on nearly 57,000 precursor molecules, modifying them with synthetic chemistry reactions via the computer to find which would make MOFs with the best deliverable capacity -- the amount of fuel that can be practically stored and released for use. "Our work differs from previous efforts because we're searching the space of possible MOF linkers specifically for this deliverable capacity," Deem said.

The researchers hope to begin real-world testing of their best MOF models. "We're very keen to work with experimental groups, and happy to collaborate," Deem said. "We have joint projects underway, so we hope some of these predicted materials will be synthesized very soon."

Yi Bao, a graduate student in Deem's lab at Rice's BioScience Research Collaborative, is lead author of the paper. Co-authors are Richard Martin and Maciej Haranczyk of the Lawrence Berkeley National Laboratory and Cory Simon and Berend Smit of the University of California-Berkeley. Deem is chair of Rice's Department of Bioengineering and the John W. Cox Professor of Biochemical and Genetic Engineering.

This news release can be found online at http://news.rice.edu/2014/12/18/rice-study-fuels-hope-for-natural-gas-cars/

These examples of metal organic frameworks, which may be suitable for natural gas storage, were discovered through a computer algorithm developed at Rice University. The program explores possible combinations of components that may be used to synthesize the compounds. In these illustrations, molecules known as secondary building units (top left) and organic binding ligands, or linkers (top right) can be used in a chemical process to produce the metal organic framework seen at the bottom, according to the program. (Courtesy of the Deem Research Group/Rice University) 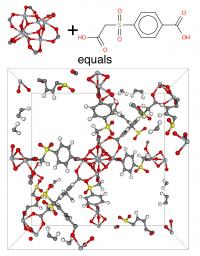