Despite their names, hermit crabs, king crabs and horseshoe crabs are not true crabs. Neither are porcelain crabs, decapod crab-like crustaceans that live in shallow water throughout the world's oceans. Researchers working at the Smithsonian Tropical Research Institute (STRI) in Panama and the Justus-Liebig University in Giessen, Germany (JLU), recently identified a new species of porcelain crab: Pachycheles tuerkayi.

"For quite some time, scientists confused our new species with another, very similar species called P. serratus that often shares the same habitat," said Alexandra Hiller, research collaborator at STRI and JLU. "They look nearly the same and are both found in the southern Caribbean Sea. However, our new species has hairy claws and is only found along the coasts of Costa Rica, Panama and Colombia, whereas P. serratus is found from Puerto Rico and the Virgin Islands to Panama and south to Venezuela."

The new species, P. tuerkayi, is named for the late Michael Türkay, head of the Crustacea Section at the Senckenberg Research Institute in Germany for more than 30 years, and long-time friend and colleague of Hiller and lead author, Bernd Werding from the Department of Animal Ecology and Systematic Zoology, JLU. The new species was published in a special issue of Crustaceana dedicated to Türkay.

"We collected samples of P. tuerkayi and P. serratus under boulders off the coast of Santa Marta, Cartagena and the Gulf of Urabá, Colombia, and also from Bocas del Toro and Playa Diablo, Panama, and from Isla Margarita, Venezuela," said Hiller. "We compared the ribosomal DNA of these two species in a phylogeny with other species of Pachycheles and found that they were very different, more different, in fact, than related crabs in the Atlantic and Pacific, separated by the Isthmus of Panama."

Hiller and Werding have described nine new species of porcelain crabs, four of which were discovered in the Caribbean and along the Pacific coasts of Colombia and Panama. The authors have identified more than 20 pairs of porcelain crab sister species--one species on each side of the Isthmus of Panama.

Porcelain crabs are tiny in the tropics, usually less than 1.5 centimeters wide, but in temperate waters like those bordering the coast of Chile, species can be more than 9 cm wide. These extremely fragile animals shed claws and walking legs more easily and frequently than true crabs as a strategy to evade a predator, which is why they are called porcelain crabs. This new discovery brings the total number of porcelain crab species in the west Atlantic to 50.

The specimens used to describe the new species will be deposited in the collections of the Museo de Historia Natural Marina de Colombia as well as in the Senckenberg Research Institute, Frankfurt, Germany.

The authors thank H. Lessios, L. Geyer, L. Rivera and A. Calderón for support at STRI's Naos Marine and Molecular Laboratory in Panama City, Panama. This study was supported by the Smithsonian and the Centre of Excellence in Marine Science, an initiative by the German Academic Exchange Service (DAAD). 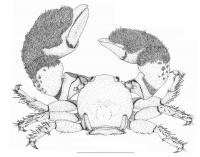