A few months ago, researchers reported the surprising discovery that marine creatures living in one Arctic fjord keep busy through the permanently dark and frigid winter months. Now, a report in the Cell Press journal Current Biology on Jan. 7, 2016, extends this activity to the whole of the Arctic. They also find that, in the absence of any sunlight, it's the moon that drives the vertical migrations of tiny marine animals.

The behavior is most likely an attempt by zooplankton to avoid predators hunting by moonlight, the researchers say.

"During the permanently dark and extremely cold Artic winter, [these] tiny marine creatures, like mythical werewolves, respond to moonlight by undergoing mass migrations," says Kim Last of the Scottish Association for Marine Science in Scotland.

No matter where the researchers looked during the Arctic winter -- in fjord, shelf, slope, or open sea -- they observed the same behavior. Further investigation showed that the marine creatures had shifted their activities from following the 24-hour solar day to following the 24.8-hour lunar day.

In winter, zooplankton's vertical migrations take place when the moon rises above the horizon, the researchers report. In addition to this daily cycle, they also discovered a mass sinking of zooplankton from the surface waters to a depth of about 50 meters every 29.5 days in the winter, coinciding with the full moon.

"The most surprising finding is that these migrations are not rare or isolated to just a few places," Last says. "The acoustic database used for our analysis cumulatively spans 50 years of data from moorings that cover much of the Arctic Ocean. The occurrences of lunar migrations happen every winter at all sites, even under sea ice with snow cover on top."

The findings have implications for the carbon cycle, which is particularly important in light of climate change.

"The daily vertical migration of zooplankton contributes significantly to the carbon pump by moving fixed carbon from the surface into the deep ocean," Last explains. "Since there is no photosynthesis during the polar night, carbon is only moved into the deep by predators feeding on prey."

This influence of zooplanktons' winter movements will need to be quantified and incorporated into biogeochemical models. As the climate changes and the ice melts, Last says, lunar-driven zooplankton migrations might "become more prevalent, though as yet, we do not know the consequences of this."

In Arctic winter, marine creatures migrate by the light of the moon 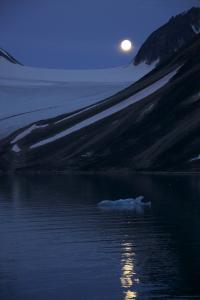