TAMPA, Fla. (Aug. 10, 2016) - When researchers from the University of South Florida (USF) and colleagues investigated how the stress hormone, corticosterone, affects how birds cope with West Nile virus, they found that birds with higher levels of stress hormone were twice as likely to be bitten by mosquitoes that transmit the virus. Their studies have implications for the transmission of other viruses such as Eastern Equine Encephalitis, and perhaps even Zika, both known to be carried by the kind of mosquitoes used in this study.

A paper describing their research was published Wednesday in the Proceedings of the Royal Society B.

"Few studies have considered how stress hormone effects on individuals might influence population dynamics," said study lead author Dr. Stephanie Gervasi, who conducted the studies while carrying out her postdoctoral work at USF and is now at the Monell Chemical Senses Center in Philadelphia. "For vector-borne diseases such as West Nile virus, the presence of corticosterone could influence pathogen spread through effects on contact rates with the mosquitoes that transmit it. In addition, stress hormones have negative effects on animals including immunosuppression and increased susceptibility to infections, which is why we are now also studying how corticosterone affects the birds' immune response to the virus."

According to the researchers, mosquitoes use a variety of cues to locate a target, including carbon dioxide output, body size and temperature. They hypothesized that these signals coming from a bird could convey information about stress hormones making the birds more appealing targets for the insects.

With the effects of corticosterone on mosquito feeding choices unknown, in a series of studies the researchers experimentally manipulated songbird stress hormones levels. Then they examined mosquito feeding preferences, feeding success and productivity as well as the defensive behaviors of birds trying to avoid being bitten.

In several phases of the study, zebra finches were treated with a low or high level of corticosterone and their caged light environment was altered to simulate dusk as the birds were made available to mosquitoes for measured periods of time. Bird and mosquito behavior was observed via video and the mosquitoes were later examined to determine if they had fed on the birds. The researchers also investigated the timing of subsequent mosquito egg-laying after the insects fed on the birds.

"Mosquitoes seem to be able to 'sniff out' the stress hormone and key in on individual birds," said the study's principal investigator Dr. Lynn Martin, associate professor in the USF Department of Integrative Biology. "The birds injected with higher levels of the hormone were twice as likely to be bitten by mosquitoes, even those hormone-treated birds were much more defensive than untreated ones. Corticosterone treatment increased tail flicks, and head shakes, and other defensive behaviors, but the mosquitoes managed to breach those defenses and feed more on stress hormone-treated birds."

The study's broader ecological implications suggest that an elevated stress hormone concentration raises the level of host attractiveness, potentially affecting the transmission of mosquito-borne diseases in a number of ways.

Mosquitoes that fed on birds with high stress hormone levels tended to lay different sized clutches of eggs at different rates than mosquitoes fed on control birds. These effects of bird stress on mosquito reproduction suggest that mosquito-feeding choice might also affect disease cycles in nature by changing the number of newborn mosquitoes that could be infected later by stressed birds.

The researchers concluded that the corticosterone levels in their test birds were within the range of normal for birds in the wild when exposed to stressors in natural their environments, such as road noise, pesticides and light pollution.

"Much more work is necessary to further understand on the interplay of host corticosterone, vector-feeding behavior, host defenses and mosquito productivity," the researchers said. 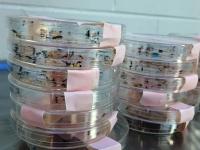