The remnants of former Tropical Storm Boris moved over southern Mexico and NASA and NOAA satellite data showed that they were merging with a low pressure area in the southwestern Gulf of Mexico. In addition, data from NASA's TRMM satellite was used to compile rainfall totals from Boris' slow trek over southern Mexico.

A visible image taken from NOAA's GOES-East satellite on June 5 at 10:45 a.m. EDT showed the clouds associated with developing System 90L in the Bay of Campeche merging with the remnants of former Tropical Storm Boris.

When NASA's Aqua satellite passed over the remnants of Tropical Storm Boris on June 5 at 08:05 UTC (4:05 a.m. EDT), they were merging with System 90L, the elongated low pressure area in the southwestern Gulf of Mexico. The Atmospheric Infrared Sounder (AIRS) instrument aboard Aqua provided temperature data on the clouds associated with both Boris' remnants and System 90L Both low pressure areas showed high clouds with temperatures near -63F (-52C). Cloud top temperatures that cold indicate thunderstorms strong enough with the potential to drop heavy rainfall, and the National Hurricane Center warned about flash flooding and mudslides in southern and southeastern Mexico.

The National Hurricane Center issued the final bulletin on the remnants of Boris on June 4 at 2100 UTC (5 p.m. EDT). At that time, the center of the remnant low pressure area was near 16.5 north latitude and 94.0 west longitude, about 80 miles east of Salina Cruz, Mexico. As has been the case with Boris for days, its remnants continued to move slowly and were only tracking north at 1 knot (1.1 mph/1.8 kph) per hour. Maximum sustained winds 20 knots (23 mph/37 kph).

At that time Boris no longer qualified as a tropical cyclone and it was merging with System 90L located in the Bay of Campeche.

On Thursday, June 5, System 90L appeared to be coming together with the remnant moisture from Boris. Forecasters have been watching System 90L most of the past week, and until Boris made its way across southern Mexico, the system had a low chance for development. Now System 90L has a medium chance for becoming a tropical depression, according to the National Hurricane Center (NHC).

System 90L was centered near 19.3 north and 94.3 west, in the Bay of Campeche. The Bay of Campeche is part of the southwestern Gulf of Mexico and is surrounded on three sides by the Mexican states of Veracruz, Campeche, and Tabasco.

At 8 a.m. EDT, NHC noted that System 90L's showers and thunderstorms had increased and that despite strong upper-level winds, some further development of this system is possible over the next day or two if the low remains offshore of eastern Mexico.

Mexico's National Meteorological Service cautioned today, June 5, that heavy rainfall is possible in the states of the Yucatan Peninsula, southeastern and eastern Mexico. For updated forecasts in Spanish, visit: http://smn.cna.gob.mx.

At NASA's Goddard Space Flight Center in Greenbelt, Maryland, data from the Tropical Rainfall Measuring Mission (TRMM) satellite data was used to compile totals of the already soaking rains from Boris. The TRMM data showed that some areas in southwestern Mexico received over 12 inches of rainfall from Boris, while System 90L on the eastern side of Mexico brought similar totals to parts of the Yucatan.

Boris may be gone now, but System 90L has the potential to produce extremely heavy rains and life-threatening flash floods and mud slides over portions of southeastern Mexico during the next few days. 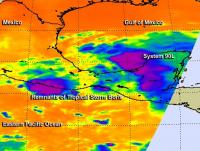