Scientists have long posited that periodic swings in Earth's climate are driven by cyclic changes in the distribution of sunlight reaching our surface. This is due to cyclic changes in how our planet spins on its axis, the ellipticity of its orbit, and its orientation toward the sun -- overlapping cycles caused by subtle gravitational interplays with other planets, as the bodies whirl around the sun and by each other like gyrating hula-hoops.

But planetary paths change over time, and that can change the cycles' lengths. This has made it challenging for scientists to untangle what drove many ancient climate shifts. And the problem gets ever more difficult the further back in time you go; tiny changes in one planet's motion may knock others' askew -- at first slightly, but as eons pass, these changes resonate against each other, and the system morphs in ways impossible to predict using even the most advanced math. In other words, it's chaos out there. Up to now, researchers are able to calculate the relative motions of the planets and their possible effects on our climate with reasonable reliability back only about 60 million years -- a relative eyeblink in the 4.5 billion-plus life of Earth.

This week, in a new paper in the Proceedings of the National Academy of Sciences, a team of researchers has pushed the record way back, identifying key aspects of the planets' motions from a period around 200 million years ago. The team is led by geologist and paleontologist Paul Olsen of Columbia University's Lamont-Doherty Earth Observatory. Last year, by comparing periodic changes in ancient sediments drilled from Arizona and New Jersey, Olsen and colleagues identified a 405,000-year cycle in Earth's orbit that apparently has not changed at all over at least the last 200 million years -- a kind of metronome against which all other cycles can be measured. Using those same sediments in the new paper, they now have identified a cycle that started out lasting 1.75 million years, but is now operating every 2.4 million years. This, they say, allows them to extrapolate long-term changes in the paths of Jupiter and the inner planets (Mercury, Venus and Mars), the bodies most likely to affect our own orbit.

Olsen's ultimate aim: to use Earth's rocks to create what he calls a "Geological Orrery" -- a record of climatic changes on Earth that can be extrapolated back into a larger map of solar system motions over hundreds of millions of years. He says it would open a window not just onto our own climate, but the evolution of the solar system itself, including the possible existence of past planets, and its possible interactions with invisible dark matter.

We spoke with Olsen about the Geological Orrery, his work, and the new paper.

Most people have probably never even heard the word "orrery." What is it, and how does it fit with our evolving understanding of celestial mechanics?

In the early 1800s, mathematician Pierre-Simon de Laplace took Newton's laws of gravitation and planetary motion and published his idea that it should be possible to develop a single great equation that would allow all the universe to be modeled. With only knowledge of the present, all the past and future could be known. This idea is embodied in the orrery, a mechanical model of the solar system. Clockwork mechanisms like this for predicting eclipses and the like go back to the ancient Greeks, but it's now clear the problem is far more complicated, and interesting. We've since discovered that the solar system not a clockwork. It is in fact chaotic over long time scales, so Laplace's grand equation was a mirage. This means you cannot unpack its history from calculations or models, no matter how precise, because the motions of the real solar system are incredibly sensitive. Varying any factor even a tiniest bit results in a different outcome after millions of years -- even what the major asteroids, or minor planets, such as Ceres and Vesta, are doing. One of my coauthors, Jacques Laskar, has shown that computations can project forward or backward only 60 million years. After that, the predictions become utterly unreliable. Since Earth is about 4.6 billion years old, this means that only about 1.6 percent of its past or future orbit can be predicted. Over billions of years, the best calculations reveal many possible terrific events, such as one of the inner planets falling into the sun or being ejected from the solar system. Maybe even that Earth and Venus could collide one day. We can't tell if any of these actually happened, or might happen in the future. So we need some other method to limit the possibilities.

So, what is the "Geological Orrery?" Are you trying again to boil everything down to one equation, or is this something different?

The Geological Orrery is the opposite of an equation or model. It's designed to provide a precise and accurate history of the solar system. We get that history right here on Earth, from the history of our climates, which is recorded in the geological record, especially in large, long-lived lakes. Earth's orbit and axis orientation are constantly changing because they are being deformed by the gravitational attractions of other bodies. These changes affect the distribution of sunlight hitting our surface, which in turn affects climate, and the kinds of sediments that are deposited. That gives us the geological record of solar system behavior. Many scientists have used sediments to determine the effects of orbital deformations. That's how we know that the ice ages of the last few million years were paced by them. Some researchers have tried to go back much further in time. What is new here is the systematic approach of taking rock cores spanning tens of millions of years, looking at the cyclical sedimentary record of climate and accurately dating those changes over multiple sites. That allows us to capture the full range of solar system-driven deformations of our orbit and axis over long time periods.

What are the rocks telling you about how such cyclic changes affect our climate?

With two major coring experiments to date, we've we learned that changes in tropical climates from wet to dry during the time of early dinosaurs, from about 252 to 199 million years ago, were paced by orbital cycles lasting about 20,000, 100,000 and 400,000 years. On top of that is a much longer cycle of about 1.75 million years. The shorter cycles are about the same today, but the 1.75 million year cycle is way off --it's 2.4 million years today. We think the difference is caused by a gravitational dance between Earth and Mars. This difference is the fingerprint of solar system chaos. No existing set of models or calculations precisely duplicates these data.

How far do you think we're going to get with this problem during your lifetime?

Next step is to combine our two finished coring experiments with cores taken at high latitudes. While our core data do a really good job of mapping some aspects of planetary orbits, they tell us nothing about others. For those, we need a core from an ancient lake above the paleo-Arctic or Antarctic circles. Such deposits exist in what are now China and Australia. We also would like to include deposits that extend the record up 20 million years or so towards the present, and another low-latitude core that we can precisely date. With those, we would be able to determine what if any changes have taken place in that Mars-Earth gravitational dance. That would be a full proof of concept of the Geological Orrery. I plan to certainly be around for that.

Your paper mentions that this work might offer insights into the evolution of the solar system -- maybe the even wider universe.

If all this works out, we could plan the grand mission to use the Geological Orrery for at least the rest of the time between 60 and 190 million years age. This mission would be expensive by geology standards, because rock coring is expensive. But the results would have far-reaching implications. For sure we would have data to produce high-quality climate models for Earth. And there is no doubt we would have the parameters for past climates on Mars or other rocky planets. But more excitingly and more speculative is the possibility of exploring how we might need to tweak gravity theory, or test some controversial theories, such as the possible existence of a plane of dark matter in our galaxy that our solar system passes through periodically.

We're talking deep time here. Does this have any application to questions about modern-day climate change?

It does have relevance to the present. in addition to the way climate is tuned to our orbit, it's also affected by the amount of carbon dioxide in the air. Now we're heading into a time when CO2 levels may be as high as they were 200 million years ago, early dinosaur times. This gives us a potential way to see how all the factors interact. It also has resonance with our search for life on Mars, or for habitable exoplanets.

The paper, "The Geological Orrery: Mapping Chaos in the Solar System," is available from the authors or the Earth Institute press office. 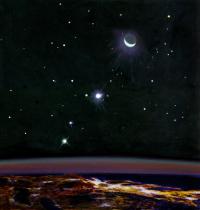