Toxins from harmful algae are present in Alaskan marine food webs in high enough concentrations to be detected in marine mammals such as whales, walruses, sea lions, seals, porpoises and sea otters, according to new research from NOAA and its federal, state, local and academic partners.

The findings, reported online today in the journal Harmful Algae, document a major northward expansion of the areas along the Pacific Coast where marine mammals are known to be exposed to algal toxins. Since 1998, algal toxin poisoning has been a common occurrence in California sea lions in Central California. However, this report is the first documentation of algal toxins in northern ranging marine mammals from southeast Alaska to the Arctic Ocean.

"What really surprised us was finding these toxins so widespread in Alaska, far north of where they have been previously documented in marine mammals," said Kathi Lefebvre, a NOAA Fisheries research scientist who led the study. "However, we do not know whether the toxin concentrations found in marine mammals in Alaska were high enough to cause health impacts to those animals. It's difficult to confirm the cause of death of stranded animals. But we do know that warming trends are likely to expand blooms, making it more likely that marine mammals could be affected in the future."

The Wildlife Algal-toxin Research and Response Network for the West Coast (WARRN-West) tested samples from more than 900 marine mammals that were harvested or found stranded in Alaska from 2004 to 2013. Testing found the algal toxins, domoic acid and saxitoxin, present in low levels in some animals from each of the 13 marine mammal species examined, and from all regions in Alaska.

The levels of these algal toxins were well below the seafood safety regulatory limits. Gay Sheffield of the University of Alaska Fairbanks and coauthor of this study, however, warned that clams found in the stomachs of harvested walruses and bearded seals that are often eaten in several coastal communities throughout western and northern Alaska may contain algal toxins. Commonly eaten animal parts like muscle and blubber are not likely to accumulate these toxins in levels of concern for human consumption, and there is no change in the current guidance from the Alaska Department of Health regarding seafood safety

Lefebvre highlighted the critical role the WARRN-West Network partners played by providing samples for the study. "By consistently submitting samples from stranded and harvested marine mammals, their work was essential to our research," said Lefebvre. The WARRN-West network, funded by NOAA Fisheries with support from network partners, will continue surveillance for algal toxins in marine mammals.

NOAA's mission is to understand and predict changes in Earth's environment, from the depths of the ocean to the surface of the sun, and to conserve and manage our coastal and marine resources. Join us on Twitter, Facebook, Instagram and our other social media channels. 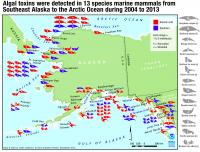 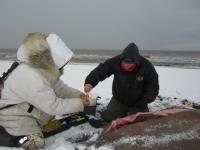