SAN FRANCISCO (November 6, 2014) —An international team of more than 100 researchers—including Dr. Michelle Trautwein of the California Academy of Sciences—has published the first modern roadmap of insect evolution. Understanding how insects are related uncovers their true ecological, economic, and medical importance, and, until now, has been largely unknown. The unprecedented results, appearing in this week's issue of Science, reconstruct the insect "tree of life" and answer longstanding questions about the origins and evolution of the most species rich group of organisms on Earth.

The results, published by scientists from the 1KITE project (1,000 Insect Transcriptome Evolution, http://www.1kite.org), are essential to understanding the millions of living insect species that shape our terrestrial living space and both support and threaten our natural resources.

"When you imagine a giant map of the evolution of life on Earth, insects are by far the largest part of the picture," says Trautwein, the Academy curator who contributed to the fly-related portion of the study. "We have not had a very clear picture of how insects evolved—from the origins of metamorphosis to which insects were first to fly. New sequencing technology allowed us to compare huge amounts of genetic data, and for the first time ever, we can fill these knowledge gaps. Science is taking us closer to solving the mysteries of the evolution of life than ever before."

Using a dataset consisting of 144 carefully chosen species, 1KITE scientists present reliable estimates on the dates of origin and relationships of all major insect groups based on the enormous molecular dataset they collected. They show that insects originated at the same time as the earliest terrestrial plants about 480 million years ago. Their analyses suggests that insects and plants shaped the earliest terrestrial ecosystems together, with insects developing wings to fly 400 million years ago, long before any other animal could do so, and at nearly the same time that land plants first grew substantially upwards to form forests.

"Phylogeny forms the foundation for telling us the who?, what?, when?, and why? of life," says Dr. Karl Kjer, Professor from Rutgers University. "Many previously intractable questions are now resolved, while many of the "revolutions" brought about by previous analyses of smaller molecular datasets have contained errors that are now being corrected."

The new reconstruction of the insect tree of life was only possible by a cooperation of more than 100 experts in molecular biology, insect morphology, paleontology, insect taxonomy, evolution, embryology bioinformatics and scientific computing. The consortium was led by Karl Kjer from Rutgers University, USA, Xin Zhou from the China National GeneBank, BGI-Shenzhen, China, and Bernhard Misof from the Zoological Research Museum Alexander Koenig in Bonn, Germany.

"We wanted to promote research on the little-studied genetic diversity of insects," says Dr. Xin Zhou, deputy director at the China National GeneBank, who initiated the project. "For applied research, it will become possible to comparatively analyze metabolic pathways of different insects and use this information to more specifically target pest species or insects that affect our resources. The genomic data we studied (the transcriptome – all of the expressed genes) gives us a very detailed and precise view into the genetic constitution and evolution of the species studied."

The goal to analyze a gigantic amount of insect genetic information posed a major challenge to 1KITE's bioinformatics and scientific computing team. "During the planning phase of the project it became clear that the available software would not be able to handle the enormous amount of data," relates Dr. Alexis Stamatakis, group leader at the Heidelberg Institute of Theoretical Studies in Germany. "The development of novel software and algorithms to handle 'big data' such as these, is another notable accomplishment of the 1KITE team, and lays a theoretical foundation for future analyses of other very large phylogenomic data sets."

The California Academy of Sciences is proud to contribute to the 1KITE team's diverse strengths. The research results represent a strong international cooperation between scientists and museum repositories for vouchering of specimens, results, and metadata, and serve as a blueprint for international excellence in research.

The Institute for Biodiversity Science and Sustainability at the California Academy of Sciences is at the forefront of efforts to understand two of the most important topics of our time: the nature and future of life on Earth. Based in San Francisco, the institute is home to more than 60 research scientists and aquarium biologists, as well as 45.6 million scientific specimens from around the world—nearly 40,000 of which are alive and on display in the Academy's Steinhart Aquarium. The institute also leverages the expertise and efforts of more than 100 international Research and Field Associates and 300 distinguished Fellows. Through expeditions around the globe, captive breeding programs, and investigations in the lab, the institute's scientists strive to understand the evolution and interconnectedness of life. Through these same efforts, as well as through partnerships, community outreach, and public engagement initiatives, the institute aims to guide critical conservation decisions and address the challenge of sustainability. Visit http://www.calacademy.org for more

The 1K (1000) Insect Transcriptome Evolution project (1KITE) has brought together internationally recognized experts in molecular biology, morphology, paleontology, embryology, bioinformatics, and scientific computing in a yet unparalleled way. For more information, visit http://www.1kite.org. 1KITE aims to study the transcriptomes (all expressed genes) of more than 1,000 insect species encompassing all recognized insect orders. The resulting data allows for inferring a robust phylogenetic tree of insects and will provide numerous additional insights into insect biology and evolution. Furthermore, the project includes the development of new software for data quality assessment and analysis.

Scientific collaborative publishes landmark study on the evolution of insects 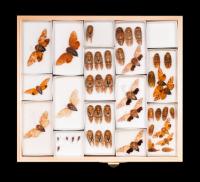 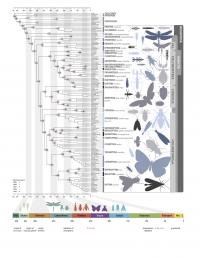