TORONTO, ON - If it seems like you're pulling more bass than trout out of Ontario's lakes this summer, you probably are.

To mitigate the trend and support conservation efforts, scientists at the University of Toronto (U of T) are sharing a way to predict which plants or animals may be vulnerable to the arrival of a new species.

The researchers looked specifically at the impact of several species of bass, fish that prefer warm water and have expanded their range northward over the past 30 years as temperatures have increased. They looked at both historical and recent data for 30 different fish species in more than 1500 lakes throughout Ontario. In most cases, they found bass and smaller fish species did not share the lake for long - the bass wiped out vulnerable fish species in relatively short order, in part by taking a share of the food available and in part by predation.

"We found that prized sportfish, such as Brook trout and the smaller fish that trout eat, are disappearing from lakes where species of Bass have expanded their habitats," said Karen Alofs, a postdoctoral researcher working with ecologist and conservation biologist Donald Jackson in the Department of Ecology & Evolutionary Biology at U of T, describing a study published this week in Proceeding of the Royal Society B.

If a dominant species can thrive in a warmer environment and wipe out other species, climate change could significantly reduce the diversity of species in our lakes as well. Less diversity could also have economic repercussions for Ontario. According to a 2010 survey of recreational fishing, anglers contributed more than $2 billion to the province's economy.

The researchers hope their work will help resource managers and scientists keep a close eye on species that are moving north with climate change over time, and predict their impact on other species so they can concentrate conservation efforts and future research accordingly.

The study uses data from the Ontario Ministry of Natural Resources and the Royal Ontario Museum, collected through long-term and large-scale monitoring of the province's approximately 250,000 lakes.

"It's important to anticipate how climate change will shape future fish communities, and ultimately fishing opportunities and the sustainability of aquatic ecosystems," said Alofs. "We are just beginning to understand the variety of indirect consequences related to climate change."

The study entitled "The vulnerability of species to range expansions by predators can be predicted using historical species associations and body size" will be published in Proceedings of the Royal Society B on July 15. It was supported by a US National Science Foundation International Research Fellowship to Alofs, a Discovery Grant from the Natural Sciences and Engineering Research Council of Canada to Jackson, and a grant from the Invasive Species Centre Partnership Fund. 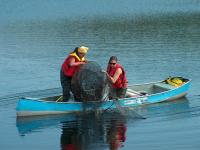