In the last decade, Neuroscientists have made major advances in their quest to study the brain. They can assemble complete wiring diagrams and catalogue the brain's many cell types. They've developed electrode arrays for recording electrical activity in individual neurons and placed itty bitty microscopes on the heads of mice to visualize their brain activity. However, almost shockingly, there are no tools to precisely measure the brain's principal output -- behavior - in freely moving animals.

Animal behavior is important to a broad range of disciplines, from neuroscience and psychology to ecology and pharmacology. Carefully studying a lab animal's behavior allows researchers to model human disease and gauge the effectiveness of new drugs. Psychologists observe it to understand how animals learn and respond to reward and punishment, while neuroscientists study it to understand how the brain produces movements. The difficulty in capturing the intricate details of an animal's natural behavior has forced scientists to study very simple and often unnatural tasks, leaving open the question of whether the insights gained can really lead to a general understanding of brain function.

Marshall's fascination with the concept of CAPTURE began as a graduate student working on a mouse model of Parkinson's. "We had developed really elaborate approaches to study how the brain is disrupted in parkinsonian mice, but our ability to measure their behavioral deficits was a far cry from the nuanced ways we can assess the impact of Parkinson's on human behavior," said Marshall. "It became clear to me that a major reason why so many drugs tested in mice don't translate to humans is that our ability to measure their effects on behavior is quite limited."

Marshall grew weary of the difficulties and constraints in relating brain activity to the animal's behavior and the field's emphasis on the 'brain-first' approach. But when he joined Ölveczky's lab he was met with interest and support. Ölveczky too recognized the primary importance of behavior and was eager to develop new tools to measure it.

"Our lab studies how skilled movements are learned and generated by the brain," said Ölveczky. "Traditionally, these studies are done by designing specific tasks and relating brain activity to simple behavioral readouts i.e. did the animal push this lever? Did the animal lick this port? Such observations tell us whether our rats solve the task, but says nothing about how they do it and that's exactly what we are interested in; how the brain learns and controls skilled movements. Getting at this required more precise and sophisticated readouts of behavior."

Marshall researched various technologies and settled on motion capture, the gold standard for measuring movements in humans and a technology perfected by Hollywood animators. He spent the first six months figuring out how to attach markers to his animals. He tried tattoos, adhesives, and hair dyes -- all without luck -- before settling on a somewhat unorthodox approach: body-piercings. Working with local veterinarians, the team engineered custom markers made of specialized reflective glass that are attached to the animals like tiny earrings. Marshall affixed these markers to 20 locations on the animal's head, trunk and limbs so he could reconstruct the three-dimensional position and configuration of the animal's major joints, so also the movements of its body.

"In contrast to traditional motion capture in humans, which is done in short bursts, we collected data continuously, 24/7," said Marshall. "This allowed us to really quantify everything rats do in their normal lives -- an atlas for behavior."

The team then looked at how behaviors change in disease and in response to drugs. For drugs, they administered caffeine and amphetamines to the animals. While both stimulants caused the rats to move around more, they did so in different ways. After caffeine, the animals ran and explored their cage as normal animals do when highly aroused. However, when on amphetamine their behavior shifted in strange new ways; the animals ran around in repeated sequential patterns.

For disease, the team studied a rat model of Fragile X syndrome, a form of autism, and was able to identify atypical patterns of grooming that hadn't been previously described. Scientists have long suspected that disrupted grooming could be used to model the motor stereotypies (repetitive movements or sounds) observed in autism, but before CAPTURE alterations in grooming patterns have been challenging to measure and reproduce. "For disease models, you really need to evaluate how the disease affects behavior and whether a particular compound or drug can reverse the specific deficits" said Ölveczky. "These effects can be very subtle and the more precise your behavioral measurements are, the better handle you'll have on the disease. This is one of the uses for this technology."

The team continues their studies by combining CAPTURE with neural recordings to describe the relationship between brain activity and behavior across the full set of natural behaviors an animal performs. They are also working with Google DeepMind to use CAPTURE to model animal behavior using deep neural networks. These studies will help model how the brain produces behavior and potentially make new advances in artificial intelligence possible.

"These technological developments mean that we can now finally open the door to understanding the organization of natural behavior and its biomechanical and neurobiological foundations," said Ölveczky. 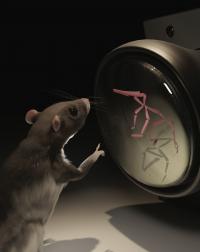