A group of researchers from MIPT and Ghent University (Belgium) has developed the first realistic model able to reproduce the complexity of the cardiac microstructure. The researchers hope that the model will help them better understand the causes of fibrosis which affects the onset of cardiac arrhythmias. Although the model is currently only able to simulate one layer of cardiac cells, electrical wave propagation observed in the simulations was the same as in the experimental tissues. The paper was published in the journal Scientific Reports.

Nina Kudryashova, a Ph.D. student at MIPT and a co-author of the study, comments: "The chances of developing arrhythmia tend to increase with age, which is partly due to fibrosis. Unfortunately, we can only observe a fully developed clinical picture and not the process of arrhythmia development itself. That is why we have proposed a mathematical model which is able to determine the factors responsible for the formation of different fibrosis patterns."

According to the World Health Organization, cardiovascular diseases account for the highest number of deaths globally. Around 40% of these deaths occur suddenly and are caused by arrhythmia, a group of conditions in which the heartbeat is irregular. Contractions of the heart are initiated by the propagation of electrical waves in cardiac tissue. Although the tissue is made up of different types of cells, it is cardiomyocytes (CMs) that perform the electromechanical function of the heart. In addition to CMs, cardiac tissue contains non-excitable cells, i.e., cells incapable of electrical excitation, such as fibroblasts (FBs). The formation of excess fibrous connective tissue is called fibrosis; it affects wave propagation and often leads to arrhythmia. Despite the fact that it is impossible to observe the stages of arrhythmia development/progression, computer modeling of cardiac tissue could provide new opportunities to study the relation between cardiac tissue morphology and arrhythmia development.

In order to build a reliable and accurate model, the researchers collected experimental data on cell shapes. For this purpose, cardiac cells, namely CMs and FBs, were cultured under different conditions. All in all, four cases were considered in the study: Non-interacting (isolated) cells with and without nanofibres and monolayers with and without nanofibres. When grown on a scaffold of nanofibers, the cells are forced to elongate in one direction, which allows a better reproduction of the texture of cardiac muscle tissue. As a result, the researchers obtained statistical data on the shapes of FBs and CMs and their interaction.

Valeriya Tsvelaya, a Ph.D. student and another co-author of the study, explains: "Since cardiac tissue cells are elongated along the fibrous substrate, the tissue exhibits anisotropy, which is when electrical waves propagate differently depending on the propagation direction. When wave propagation is directionally independent (such as in the case of non-nanofibrous monolayer substrates), isotropy is observed."

To reproduce the formation of cardiac tissue, the researchers took a mathematical model -- one that is widely applied to study tissue growth -- and optimized it using the collected experimental data. The model they obtained provided a detailed and accurate reproduction of cell shape parameters in each of the four cases. In order to observe excitation wave propagation, the researchers stimulated the cells in the culture with an electrode. They also imitated wave propagation in virtual cardiac tissue and discovered that the wave propagation pattern accurately reproduced the experimentally observed behavior for both isotropic and anisotropic cases. This means that the proposed model can indeed be used to study cardiac tissue properties and various risk factors for arrhythmias.

Attempts to simulate wave propagation in cardiac tissue had been made before, but those were simple models which did not reproduce the complexity of cell shapes. Besides, FBs in all the previously performed simulations were arranged in a random way, while in reality CMs and FBs are arranged in a pattern arising from the peculiarities of their interaction. In their model, the researchers considered both the shapes and the interaction between the cells, thus making their computer simulations more accurate and realistic.

"The model we proposed can predict the same wave propagation patterns we observed in our experimental samples, which means it can be used to help us learn to predict the probability with which a patient will develop arrhythmia. You just vary the conditions under which a tissue is formed and see what the chances of developing arrhythmia in this tissue are," explains Konstantin Agladze, head of the Laboratory of Biophysics of Excitable Systems at MIPT.

That said, the model is currently in the initial stage of development. There are a number of factors to be considered, such as cell migration, all of which can influence tissue development. Besides, the heart is three-dimensional while the model is two-dimensional, which means the researchers still need to work out how to make it 3-D. Achieving this will open up new possibilities of describing tissues in living organisms.

A 'virtual heart' to simulate arrhythmia 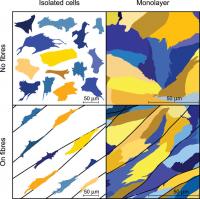 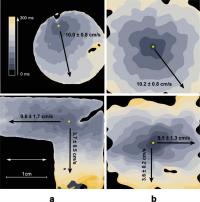