New research shows how two drastically different organisms--a green alga and the spotted salamander--get along as cellular roommates. Scientists at the American Museum of Natural History and Gettysburg College found that this symbiosis, the only known example that includes a vertebrate species, puts stress on algal cells, changing the way they make energy, but does not seem to negatively impact salamander cells. The work is published today in the journal eLife.

"Science shows us the many ways that life is interconnected, especially on the microscopic level, where we see how many organisms depend on close contact with or internalization of other species for food, defense, or reproduction," said lead author John Burns, a postdoctoral researcher in the Museum's Division of Invertebrate Zoology. "But the relationship between this particular alga and salamander is very unusual."

Scientists have known for more than a century that a green alga (Oophila amblystomatis) grows in the egg cases of the spotted salamander (Ambystoma maculatum)--the strange pairing is visible to the naked eye in the green hue of salamanders' eggs. The symbiosis was originally thought to occur only between the salamander embryo and the algae living outside it. The embryos produce nitrogen-rich waste that is useful to algae, and the algae increases the oxygen content of the fluid around the respiring embryos. But recent research has revealed that the algae are actually located inside cells all over the spotted salamander's body. This cell-within-a-cell relationship can also be found in corals and in the guts of cicadas, but the green alga-spotted salamander interaction is the only known example of a symbiont entering the cells of a vertebrate species.

"This is really such a strange arrangement to think about, that the salamanders allow the algae to live in their egg cases. It would be like having a bunch of green algae in a womb," said study co-author Ryan Kerney, an assistant professor at Gettysburg College. "What we set out to look at now is the kind of molecular change that happens when the salamander cells and green algae cells are together."

"We are learning that these two fundamentally different cells are changing each other dramatically, and this might be relevant for other symbiotic systems, including human and parasitic microbe relationships," said study co-author Eunsoo Kim, an assistant curator in the Museum's Division of Invertebrate Zoology.

Other authors on this study include Huanjia Zhang and Elizabeth Hill, undergraduate students at Gettysburg College.

This work was supported, in part, by the Howard Hughes Medical Institute and the National Science Foundation, grant #s 1428065 and #1453639.

For more information about this project, see this recent episode of the Museum's Shelf Life series: http://www.amnh.org/shelf-life/episode-11-green-grow-the-salamanders

For a green alga, spotted salamanders are stressful hosts 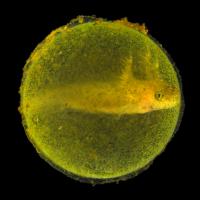