The research team found that annual disinfection of parakeet nest sites prior to the breeding season, intended to reduce the spread of infectious disease in endangered parrot species, didn't have the impact conservationists expected or indeed, had hoped for, leading to recommendation for a different approach.

Psittacine Beak and Feather Disease (PBFD), is a globally emerging infectious disease affecting parrot species, and researchers were looking at methods to reduce infection rates in the endangered birds.

The research team found 83% of the fledglings in untreated nests survived compared to 79% in the treated nests. The long-term study of echo parakeets in Mauritius assessed how effective the disinfection measures were in reducing the probability of a nest becoming infected with PBFD.

Project lead Deborah Fogell, a PhD student from the Durrell Institute of Conservation and Ecology (DICE) in Kent's School of Anthropology and Conservation (SAC) and ZSL's (Zoological Society of London) Institute of Zoology said:

"The desperate need of conservationists to respond to infectious disease outbreaks in wildlife populations, especially those that are small or recovering, often means field protocols need to be implemented before critical evaluation. Our research findings will help us improve biosecurity measures implemented in Mauritius in order to better support fledging success".

Conservationists have battled against Emerging Infectious Diseases (EIDs), which are drivers of global extinction of threatened species. The research team at DICE, a leading research institute which provides training in wildlife conservation, assessed the efficiency of biosecurity protocols in managing PBFD. Psittaciformes (parrots) are one of the most vulnerable avian orders, with over a quarter of all extant species recognised as in need of conservation action and 75% of species in population decline.

Deborah Fogell and her colleagues recommend that it is essential to continue to evaluate population management techniques to ensure they are achieving the desired outcomes. The research illustrates that conservation activities should be carefully considered through targeted monitoring via further research and development, with conclusions prioritising conservation objectives.

The research team recommends that conservationists working with wild populations in need of recovery or assistance don't take a dogmatic approach to their management techniques and use methods that are assumed to have a positive outcome, simply because it is thought that they should, or because in a clinical/non-field based setting they have shown to work in a specific way.

Critical evaluation is the best approach to ensure that conservation is actually achieving what it set out to achieve within the guidelines of conservation objectives. 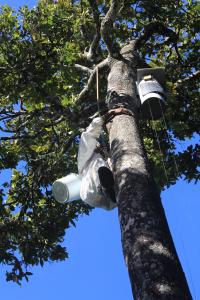