Scientists have developed a new type of laser that can deliver high amounts of energy in very short bursts of time, with potential applications in eye and heart surgery or the engineering of delicate materials.

The Director of the University of Sydney Institute of Photonics and Optical Science, Professor Martijn de Sterke, said: "This laser has the property that as its pulse duration decreases to less than a trillionth of a second, its energy could go through the roof.

"This makes them ideal candidates for the processing of materials that require short, powerful pulses. One application could be in corneal surgery, which relies on gently removing material from the eye. This requires strong, short light pulses that do not heat and damage the surface."

The research is published today in Nature Photonics.

The scientists have achieved this remarkable result by returning to a simple laser technology that is common in telecommunications, metrology and spectroscopy. These lasers use an effect known as soliton waves, which are waves of light that maintain their shape over long distances.

Solitons were first identified in the early 19th century, not in light but in water waves in the industrial canals of England.

"The fact that soliton waves in light maintain their shape means they are excellent for a wide range of applications, including telecommunications and spectrometry," said lead author Dr Antoine Runge from the School of Physics.

"However, while lasers producing these solitons are simple to make, they do not pack much punch. A completely different - and expensive - physical system is required to produce the high-energy optical pulses used in manufacturing."

Co-author Dr Andrea Blanco-Redondo, Head of Silicon Photonics at Nokia Bell Labs in the US, said: "Soliton lasers are the most simple, cost-effective and robust way to achieve these short bursts. However, until now, conventional soliton lasers could not deliver enough energy.

"Our results have the potential to make soliton lasers useful for biomedical applications," said Dr Blanco-Redondo, who was previously at the University of Sydney Nano Institute.

This research builds on earlier work established by the team at the University of Sydney Institute for Photonics and Optical Science, which published its discovery of pure-quartic solitons in 2016.

A new law in laser physics

In a normal soliton laser, the energy of light is inversely proportional to its pulse duration, demonstrated by the equation E = 1/τ. If you halve the pulse time of the light, you get twice the amount of energy.

Using quartic solitons, the energy of light is inversely proportional to the third power of the pulse duration, or E = 1/τ3. This means if your pulse time is halved, the energy it delivers in that time is multiplied by a factor of eight.

"It is this demonstration of a new law in laser physics that is most important in our research," Dr Runge said. "We have shown that E = 1/τ3 and we hope this will change how lasers can be applied in the future."

Establishing this proof of principle will enable the team to make more powerful soliton lasers.

Dr Blanco-Redondo said: "In this research we produced pulses that are as short as a trillionth of a second, but we have plans to get much shorter than that."

"Our next goal is to produce femtosecond duration pulses - one quadrillionth of a second," Dr Runge said. "This will mean ultra-short laser pulses with hundreds of kilowatts of peak power."

Professor De Sterke said: "We hope this type of laser can open a new way to apply laser light when we need high peak energy but where the base material is not damaged."

This work was supported by the Australian Research Council (ARC) Discovery Project (grant no. DP180102234), the University of Sydney Professor Harry Messel Research Fellowship and the Asian Office of Aerospace R&D (AOARD) (grant no. FA2386-19-1-4067). 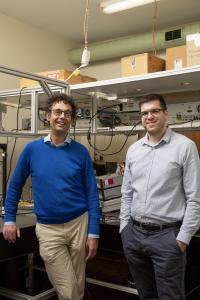