Bioengineered rat kidneys developed by Massachusetts General Hospital (MGH) investigators successfully produced urine both in a laboratory apparatus and after being transplanted into living animals. In their report, receiving advance online publication in Nature Medicine, the research team describes building functional replacement kidneys on the structure of donor organs from which living cells had been stripped, an approach previously used to create bioartificial hearts, lungs and livers.

"What is unique about this approach is that the native organ's architecture is preserved, so that the resulting graft can be transplanted just like a donor kidney and connected to the recipient's vascular and urinary systems," says Harald Ott, MD, PhD, of the MGH Center for Regenerative Medicine, senior author of the Nature Medicine article. "If this technology can be scaled to human-sized grafts, patients suffering from renal failure who are currently waiting for donor kidneys or who are not transplant candidates could theoretically receive new organs derived from their own cells."

Around 18,000 kidney transplants are performed in the U.S. each year, but 100,000 Americans with end-stage kidney disease are still waiting for a donor organ. Even those fortunate enough to receive a transplant face a lifetime of immunosuppressive drugs, which pose many health risks and cannot totally eliminate the incidence of eventual organ rejection.

The approach used in this study to engineer donor organs, based on a technology that Ott discovered as a research fellow at the University of Minnesota, involves stripping the living cells from a donor organ with a detergent solution and then repopulating the collagen scaffold that remains with the appropriate cell type – in this instance human endothelial cells to replace the lining of the vascular system and kidney cells from newborn rats. The research team first decellularized rat kidneys to confirm that the organ's complex structures would be preserved. They also showed the technique worked on a larger scale by stripping cells from pig and human kidneys.

Making sure the appropriate cells were seeded into the correct portions of the collagen scaffold required delivering vascular cells through the renal artery and kidney cells through the ureter. Precisely adjusting the pressures of the solutions enabled the cells to be dispersed throughout the whole organs, which were then cultured in a bioreactor for up to 12 days. The researchers first tested the repopulated organs in a device that passed blood through its vascular system and drained off any urine, which revealed evidence of limited filtering of blood, molecular activity and urine production.

Bioengineered kidneys transplanted into living rats from which one kidney had been removed began producing urine as soon as the blood supply was restored, with no evidence of bleeding or clot formation. The overall function of the regenerated organs was significantly reduced compared with that of normal, healthy kidneys, something the researchers believe may be attributed to the immaturity of the neonatal cells used to repopulate the scaffolding.

"Further refinement of the cell types used for seeding and additional maturation in culture may allow us to achieve a more functional organ," says Ott. "Based on this inital proof of principle, we hope that bioengineered kidneys will someday be able to fully replace kidney function just as donor kidneys do. In an ideal world, such grafts could be produced 'on demand" from a patient's own cells, helping us overcome both the organ shortage and the need for chronic immunosuppression. We're now investigating methods of deriving the necessary cell types from patient-derived cells and refining the cell-seeding and organ culture methods to handle human-sized organs."

Ott's team focuses on the regeneration of hearts, lungs, kidneys and grafts made of composite tissues, while other teams – including one from the MGH Center for Engineering in Medicine – are using the decellularization technique to develop replacement livers. Lead author of the Nature Medicine paper is Jeremy Song, MGH Center for Regenerative Medicine; additional co-authors are Jacques Guyette, PhD, Sarah Gilpin, PhD, Gabriel Gonzalez, PhD, and Joseph Vacanti, MD, all of the MGH Center for Regenerative Medicine. The study was supported by National Institute of Health Director's New Innovator Award DP2 OD008749-01. 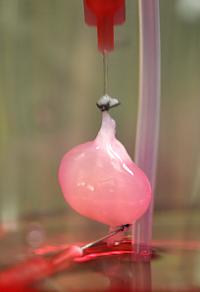