Nocturnal seabirds nesting on remote islands can be extremely difficult to study. An increasingly important tool for monitoring these populations involves acoustic sensors deployed in the field to record sounds over long periods of time. But analysis of the resulting recordings to identify and count the calls of different species can be time-consuming, even with computers and artificial intelligence.

An alternative approach for acoustic monitoring is to evaluate all of the sounds in an environment as a 'soundscape', using features such as acoustic diversity, complexity, and intensity as indicators of ecosystem health. In a new study, recently published in Restoration Ecology, researchers used soundscape analysis to evaluate the outcomes of restoration efforts in the Western Aleutian Islands.

"We learned that we can collect sound data at larger scales and understand where the ecosystem is responding to our actions," said first author Abraham Borker, who led the study as a graduate student in the Conservation Action Lab at UC Santa Cruz. Now an adjunct lecturer in ecology and evolutionary biology, Borker came to UCSC to study seabird conservation and earned his Ph.D. in 2018.

"Seabirds are special because they serve as a link between the ocean and land, transporting nutrients from the sea to land and transforming the islands they breed on," he said.

The new study took advantage of a highly successful campaign to remove invasive species and restore seabird nesting colonies in the Western Aleutian islands as a natural experiment. These remote islands, located in the Northern Pacific Ocean between Russia and Alaska, are important nesting sites for many species of seabirds.

In the 18th century, fur traders introduced arctic foxes to the islands, and they quickly began devastating seabird populations. Later, rats brought to the islands during World War II added to the plight of nesting seabirds. The islands are now part of the Alaska Maritime National Wildlife Refuge managed by the U.S. Fish and Wildlife Service, which in 1949 began efforts to remove the invasive species and restore healthy seabird colonies.

Today, some of the islands still have invasive predators while others have had them removed for varying amounts of time. One island that was never inhabited by foxes or rats was used as a reference for comparison to restored islands, representing a healthy seabird island. Overall, the varying timelines for the removal of invasive species from each island created a perfect opportunity for Borker to test if soundscapes reflect the recovery of island seabirds.

Traditional acoustic monitoring techniques had already been used to evaluate the recovery of seabirds on these islands. That work, led by Rachel Buxton of Colorado State University (a coauthor of the new study) and published in 2013, involved identifying and counting individual bird calls.

"It's quite a laborious process, even with automated tools," Borker said. Using the recordings from the earlier study, the researchers performed soundscape analyses and compared the results with the previous findings to see if the soundscape approach could assess restoration outcomes at a fraction of the effort.

Borker and his team characterized over 800 hours of recordings from across the islands, using a variety of "eco-acoustic" indexes to quantify features of the recordings indicative of each island's ecological conditions. These indexes enabled the researchers to compare the complexity, richness, and similarities of soundscapes between different environments.

Using mathematical models, they found that compared the soundscape analyses to the results from the 2013 study. They found that of the indexes tested, the acoustic richness index, as well as indexes of acoustic similarity to the reference condition, performed best in indicating seabird recovery on the islands. Their findings suggest that eco-acoustic indexes can provide an initial rapid analysis, identifying coarse differences in the amount of seabird acoustic activity between restored areas and a reference site. Their analysis also identified time since invasive species removal as the chief predictor of seabird acoustic activity, as did the 2013 study.

While promising, Borker said this approach to soundscape monitoring isn't perfect, but can scale in a way that other approaches struggle to do. In one case, an island still invaded with rats and with a low seabird nesting population yielded index values similar to an uninvaded and healthy island. Heavy winds and rain during the acoustic recordings may have influenced the indexes in this case, highlighting the importance of understanding the non-biological differences between recording sites, he said.

Borker is now working to get information about soundscape analysis into the hands of conservationists. Organizations such as the Nature Conservancy have already begun taking this soundscape acoustic monitoring approach to other environments.

"This tool can be used to measure change in not one or two species, but an entire ecosystem over time," said coauthor Bernie Tershy, a research biologist in the Institute of Marine Sciences at UC Santa Cruz. This approach could be used to analyze the changes in all of the species in an environment--frogs, birds, insects, and more--all at once, he said.

Sometimes it's unclear which restoration method is best, Borker said, but by using this holistic approach researchers may be able to understand which actions are more effective. Finding tools to measure the status of restored sites that are highly automated is critical to scaling conservation and restoration efforts worldwide.

Borker's efforts have shown that this is now possible, in less time and with less resources than standard acoustic monitoring. "It's exciting--we can measure conservation outcomes across a community and at large scales," he said.

In addition to Borker, Buxton, and Tershy, the coauthors of this paper include Ian Jones, Heather Major, Jeffrey Williams, and Donald Croll. This work was funded by Natural Sciences and Engineering Research Council of Canada and the Alaska Maritime NWR of the U.S. Fish and Wildlife Service. 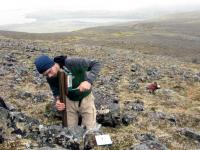