As insects grow old their behaviour becomes increasingly predictable according to new research published in the journal Behavioural Ecology. The study, which set out to understand how personality alters with age, found that behavioural traits tend to become entrenched as crickets age.

The results suggest that older crickets may struggle to respond to changing environmental conditions and would therefore be at a disadvantage relative to younger individuals in the face of changes in climate, habitat or diet or in the event of a natural disaster.

In the study, carried out by the University of Exeter, wild field crickets (Gryllus campestris) were set personality tests to measure their shyness, their inclination for activity and exploration and their tendency to leave a refuge.

The researchers found that the crickets, which had an adult lifespan of about 25 days, all had different personalities but, unlike humans, they tended to become more active as they grew older.

David Fisher from the University of Exeter's Penryn Campus in Cornwall said: "Even animals that only live for a very short time show signs of ageing, just like humans. Our results show that behaviour in field crickets tends to become more ingrained as the individuals age."

Project leader Professor Tom Tregenza also from the University of Exeter said: "This has important implications for our understanding of the survival prospects of older animals as it suggests that they may be less able to respond to changes in their environment."

The study was carried out in a Spanish meadow wired up with 140 video cameras to capture the lives of an entire population of wild insects. Crickets were caught, tagged, tested and released back into their burrows. The entrances to the burrows were monitored to enable the same individuals to be re-captured. They then underwent further personality testing to determine how their responses changed with age.

The research received funding from Natural Environment Research Council, the Leverhulme Trust and the Royal Society.

'Dynamics of among-individual behavioral variation over adult lifespan in a wild insect' will be published in the journal Behavioural Ecology.

Images can be downloaded from here: https://www.dropbox.com/sh/1rwq8stuq1jzbyb/AAASHEdZRk8vLstbr9s1erb4a?dl=0

Please attribute all photographs to WildCrickets.org

The University has four campuses. The Streatham and St Luke's campuses are in Exeter and there are two campuses in Cornwall, Penryn and Truro. The 2014-2015 academic year marks the 10-year anniversary of the two Cornwall campuses. In a pioneering arrangement in the UK, the Penryn Campus is jointly owned and managed with Falmouth University. At the campus, University of Exeter students can study programmes in the following areas: Animal Behaviour, Conservation Biology and Ecology, English, Environmental Science, Evolutionary Biology, Geography, Geology, History, Human Sciences, Marine Biology, Mining and Minerals Engineering, Politics and International Relations, Renewable Energy and Zoology.

The University has invested strategically to deliver more than £350 million worth of new facilities across its campuses in the past few years; including landmark new student services centres - the Forum in Exeter and The Exchange at Penryn - together with world-class new facilities for Biosciences, the Business School, the Centre for Ecology and Conservation and the Environment and Sustainability Institute. There are plans for another £330 million of investment between now and 2016. http://www.exeter.ac.uk/cornwall

About the University of Exeter's Centre for Ecology and Conservation (CEC)

Staff at the Centre for Ecology and Conservation, based on the Penryn Campus, undertake cutting-edge research that focusses on whole organism biology. The CEC has three interlinked research groups: Behaviour, Ecology and Conservation, and Evolution which constitute 40 academics and over 100 early career researchers. It engages widely with businesses, charities and government agencies and organisations in Cornwall, the Isles of Scilly and beyond to translate its research into societal impact. Staff at the CEC deliver educational programs to some 500 undergraduate and 100 postgraduate students.

A new £5.5 million Science and Engineering Research Support Facility (SERSF) is currently under construction at the Penryn Campus. The facility will bring pioneering business, science and engineering together and will provide space for the growing CEC alongside the University of Exeter Business School, which is expanding into Cornwall, and the University's Marine Renewables team.

The University of Exeter and Falmouth University are founding partners in the Combined Universities in Cornwall (CUC), a unique collaboration between six universities and colleges to promote regional economic regeneration through Higher Education, funded mainly by the European Union (Objective One and Convergence), the South West Regional Development Agency and the Higher Education Funding Council for England, with support from Cornwall Council.

Elderly crickets are set in their ways, study finds 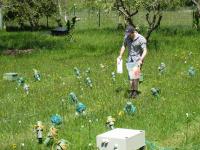